MUNICH.- The third exhibition to mark the Alte Pinakothek’s 175th anniversary comprises 30 selected paintings by Lucas Cranach the Elder (1472-1553) from the Bayerische Staatsgemäldesammlungen’s extensive holdings. It is the first Cranach exhibition in the Alte Pinakothek. The exhibition is on display from April 14 and runs until July 17, 2011.

The title “Cranach in Bavaria” encompasses biographical and art-historical aspects as well as those related to the history of the collection and museum policies. The Wittenberg painter was born on the border of present-day Bavaria in 1472 and became famous under the name of his place of birth, Kronach, in Upper Franconia. His first large altarpiece, “The Crucifixion” of 1503 in the Alte Pinakothek, was most probably painted for a Bavarian monastery. When the painting was added to the elector of Bavaria’s gallery in 1804, the Cranach collection there was already of considerable age, the first paintings for Munich having been acquired back in the 16th century. The holdings that were substantially expanded in the early 19th century now include more than 100 paintings by Cranach, by artists from his workshop, from his circle and his successors. Of these, 81 are displayed at six different places in the Free State of Bavaria.

The exhibition presents a cross-section of these holdings and touches on a number of questions that are the focus of reseach today. The 30 exhibited paintings include the five oldest works in the collection, documented as already being in Munich and Schleißheim in the 16th/17th century: “Golden Age”, the life-sized “Lucretia”, “Christ and the Woman Taken in Adultery”, “The Israelites Crossing the Red Sea” and “The Sacrifice of Abraham”. Later acquisitions are also represented pars pro toto. Examples of the broad range of subjects produced in paintings from Cranach’s workshop – from the Old Testament to scenes from Antiquity and mythology, popular during the Renaissance, as well as humorous presentations of the “unequal couple” – are on show, and the subject of serial production and the variation of motifs addressed.

“Cranach in Bavaria” also illustrates the decentralised deployment of artworks owned by the Free State in an exemplary fashion. This is not a modern-day invention but something that was introduced more than 200 years ago with a tightly-knit network of branch galleries that still exists today. On the occasion of the Alte Pinakothek’s anniversary, it is the exhibition’s conscious intention to draw attention to the fact that the Bayerische Staatsgemäldesammlungen’s treasures are not just concentrated in Munich, but that a trip to Aschaffenburg, Bamberg, Kronach, Nuremberg and Regensburg is well worth its while. The Lamentation beneath the Cross is one of the earliest paintings from Lucas Cranach the Elder. It was probably executed during travels through an as yet unidentified region after his Vienna period and shortly before the artist was named Court Painter by Frederick the Wise. In contrast to more traditional depictions, Cranach has placed the crosses at a slanted angle in the picture plane, somewhat like a didactic piece on perspective. In so doing, Mary becomes the focal point of the painting - exemplary for the faithful who are called upon to behold Christ's suffering. 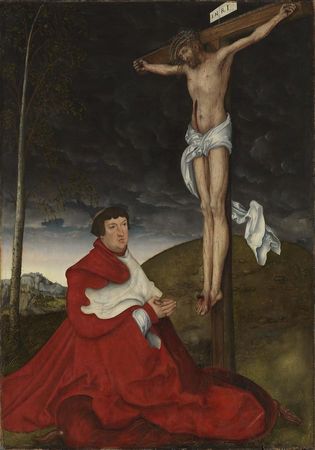 Cardinal Albrecht von Brandenburg is kneeling on a large cushion before the Crucified Christ, who is portrayed on a rather small scale. Christ is here depicted as a devotional object for a Passion meditation. Albrecht's portrayal was based on an engraving from Albrecht Dürer. This painting reveals Cranach's ability as a fine colourist. The red garment, in strong contrast to the dark surroundings, spreads out with an individuality that almost has a modern feel to it.