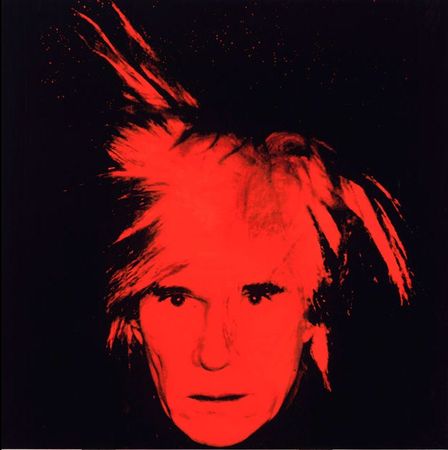 NEW YORK, NY.- Andy Warhol’s last great Self-Portrait, 1986, will headline the Post-War and Contemporary Auction season in New York at Christie’s Post-War and Contemporary Art Evening sale on May 11, 2011. An art-historical landmark, the monumental painting is poignantly underscored with the theme of a fleeting lifetime, and is estimated to realize from $30,000,000 to $40,000,000. The painting is executed in the artist’s signature Pop Red— a color in which he rendered his most famous image of Marilyn Monroe, as well as his greatest Death and Disaster Painting, Red Explosion (Atomic Bomb), 1963.

This powerful and contemplative painting is one of the largest self-portraits ever attempted by the artist, and was one of two giant works that were first exhibited in London in a seminal exhibition of new self-portraits at the Anthony d’Offay Gallery in 1986. The only other example is now in the Guggenheim Museum in New York.

For an artist who had continually hidden his identity behind a cool exterior, this painting is the first time the artist used self-portraiture to explore his own mortality with the utmost honesty and directness. The hypnotic nature of the painting is intensified by its mammoth size and bold color. At almost 9 feet square, the artist stares directly at the viewer and at death itself. The crimson and black make the work almost demonic in its intensity.

The Anthony d’Offay exhibition coincided with the artist’s tragic and untimely death. It was, universally, a critical and commercial success. Some writers, such as the great art historian Robert Rosenblum, observed at the time that Warhol was addressing one of the great themes of art history, that of the aging master taking, perhaps, a last look at himself, with a “melancholy introspection” like that of the “great late self-portraits of Rembrandt and Van Gogh.” Indeed, these were to be his final Self-Portraits, now recognized as being among the most moving and profound works of his career. The artist died six months after the exhibition, in February 1987, of complications following a routine surgery.

Amy Cappellazzo, Christie’s International Co-Head, Deputy Chairman, Post-War and Contemporary Art, comments: “With his unique ability to fuse painting and photography into an unforgettably iconic image, Warhol condensed all the recent themes of his art in this magnificent Self-Portrait into a single splash of color set on an inky black background. Expressive of the brief nature of both life and celebrity, this haunting self-exposure speaks powerfully of human existence and the dark, ever-present simplicity of death. It is a rare event that a work of this grandeur and stature comes to the market and with all other examples in museums, it will the last chance that buyers will have to bid on a work that shifted art history.”

Warhol painted only seven large scale self-portraits in 1986. All the other versions are in museums or in foundations open to the public. A purple Self-Portrait was acquired in 2010 for $32.5 million for a private museum; other examples belong to Guggenheim Museum, New York, The Fort Worth Art Museum and the Andy Warhol Museum in Pittsburgh.