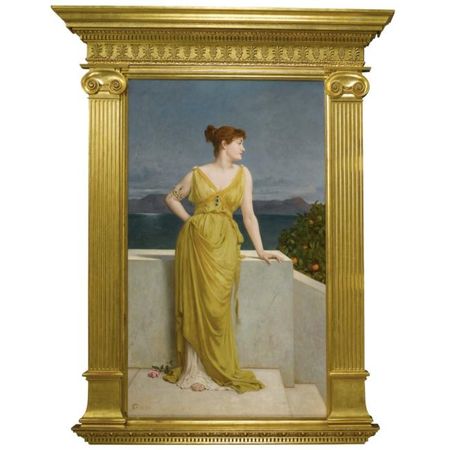 NOTE: In the late nineteenth century, Mrs. Charles Kettlewell went by her maiden name, Edith Woodworth, as a popular stage actress in London's theaters. She excelled in her portrayals of sly or scorned women in productions like Frou-Frou, where she played tragicomic Gilberte, an irresponsible young wife who learns too late to be faithful. When reviewing Mrs. Kettlewell's performance as Countess d'Autreval in The Ladies' Battle, The Theater's critic considered her "charming in appearance... exquisitely dressed, and gifted with true artistic feeling" (The Theater, August 1, 1887, p. 8). Beyond her work on the stage, Mrs. Kettlewell was an influential producer and manager of theaters, including the famed Globe; she was also a philanthropist backed by her husband's wealth. Mrs. Kettlewell's larger-than-life qualities -- her strong spirit, dramatic personality, and great beauty -- are captured in Goodall's nearly life-size portrait. Standing at the top of a marble staircase against the sea and distant mountain range, Mrs. Kettlewell is configured as a Classical beauty or mythological goddess (accentuated by the architectural details of the work's monumental tabernacle frame, possibly original). Though Goodall may have first seen Mrs. Kettlewell on stage, in his Reminiscences of 1902, he recalled their first meeting at a "fancy-dress ball," where he found her "so attractive in appearance" that he asked to be introduced (Goodall, p. 258). The artist became so captivated by the woman and her "Greek dress... a pale apricot color" that the next time they met he invited her to pose for his Academy portrait of 1891 (Goodall, p. 259). He perfectly describes his own work: "Her face, arms, and hands would bear comparison with those of the finest Greek sculptuary — she was really beautiful. Her feet were sandaled, and on her arms she had sapphire and diamond snake-armlets high up between the elbow and the shoulder" (Goodall, p. 259). Mrs. Kettlewell seemed equally fascinated by her portrait. As Goodall wrote, "from the very commencement of charcoaling it on the canvas" and "while the picture was in progress and she was resting, she used to sit in front of the portrait and study it curiously," asking, "'Am I as beautiful as that?'" to which he replied "'No painter can do you justice'" (Goodall, p. 259).

A celebrated painter of biblical and Orientalist subjects, Goodall was also a successful and accomplished portraitist. In addition to the present work, four out of six of the artist's works submitted to the Royal Academy of 1891 were portraits. Yet, Mrs. Charles Kettlewell likely held a particularly important and personal place among his works. In Reminiscences, Goodall devoted dozens of pages to his love of the stage; he attended countless productions, from the Classics to Shakespeare to popular debut productions. As he explained, "I was and am still very fond of the theatre, and in my young days I always took my pocket sketch-book with me and made drawings of the actors" (Goodall, p. 39). As suggested by Mrs. Kettlewell's costume and setting, Goodall may have been particularly inspired by the contemporary vogue for all things Antique, including staged Roman subject dramas in the 1890s. As envisioned by Goodall, Mrs. Kettlewell could easily be a star of one of these "toga plays," with their elaborate painted sets, fanciful costumes, and sensational plots of decadent Rome's heroes and beauties (see: Rosemary Barrow, "Toga Plays and Tableaux Vivants: Theatre and Painting on London's Late-Victorian and Edwardian Popular Stage," Theatre Journal, vol. 62, no. 2, May 2010, pp. 209-226). Overall, Goodall's deep affection for the stage, his sitter, and his craft was evident to Royal Academy critics, who considered Mrs. Charles Kettlewell "quite beyond the range of criticism" and "idealized to a degree but very beautiful" (Moore, p. 49; Cecil Howard, p. 115).