LONDON.- Considered one of Europe’s most important and comprehensive private collections of Japanese Gentleman’s accessories, Bonhams announces that Part Two of the Edward Wrangham collection realised £1.6 million on 10th May.

Top prices were paid for inro* and other works of art by Shibata Zeshin (1868-1912), one of the most famous painters and lacquerers of the 19th century Meiji period in Japan. The top lot of the sale was an exquisite two case inro, lacquered with metalwork tools in gold, silver and black, with a folkloric deity called Hotei lightly engraved behind the principle lacquer. Exceeding its pre-sale estimate of £10,000 – 15,000 by eight times, the inro realised £120,000. 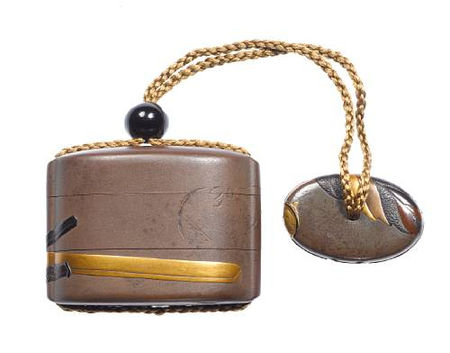 Of wide form, bearing a shibuichi-nuri ground and lacquered with metalwork tools, in gold, silver and black takamakie and lightly engraved with Hotei leaning on his sack, in katakiri and kebori, the interior of rogin-nuri, inscribed Shokado utsusu Somin with kao, signed Zeshin; with lacquer hako-netsuke of oval form, lacquered on the olive-green ground with a large oak acorns over which walks an ant in delicate kebori, the interior of nashiji, signed Zeshin. 4.8cm (1 7/8in). Sold for £120,000

The decoration on the inro is deliberately chosen by Zeshin as a tribute to the great Yokoya School chiseller Somin.

Also by Shibata Zeshin, a roiro lacquer five-case inro decorated in gold, silver and black with a finch perched on a cherry branch realised £102,000 against a pre-sale estimate of £20,000 – 25,000. 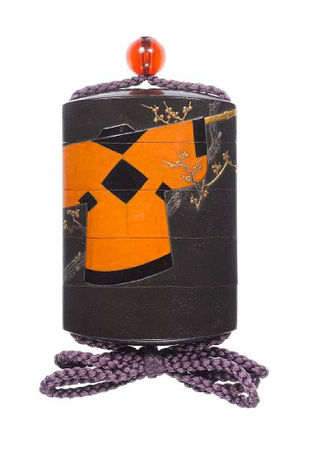 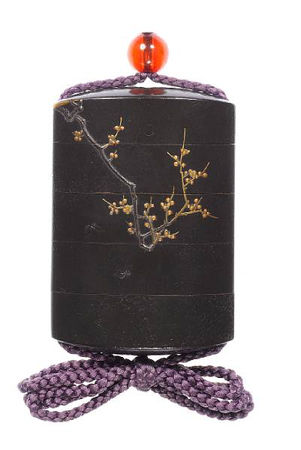 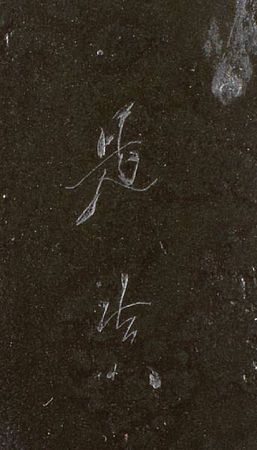 The dark greenish-grey, matt seido-nuri ground decorated in orange and black takamakie with a haori hanging on a bamboo pole suspended from the branches of a plum tree, the design continuing on the reverse with two butterflies rendered in delicate kebori flitting beneath the plum branches, the interior of rich nashiji; the base signed with scratched characters Zeshin. 7.1cm (2¾in). Sold for £102,000

An extremely rare early 20th century, roiro lacquer four-case inro by Shirayama Shosai (1853-1923) was also one of the top lots of the sale, exceeding the pre-sale estimate of £20,000 – 30,000 by realising £92,400. Finely lacquered in gold, the inro depicts a full-length portrait of the Kabuki actor Ichikawa Danjuro IX, a contemporary of the artist.

Ichikawa Danjuro was one of the most famous and successful Kabuki actors during the Meiji Period, and is widely credited with ensuring that the traditional art form remained vibrant as Japan struggled with Westernisation. Represented in a Shibaraku role, one of the most popular pieces in the Kabuki repertoire, he is showing off a fan, with the large square sleeves of the extravagant costume continuing on the reverse. Works by Shirayama Shosai, one the most important lacquer artists of the time,are very rare and highly sought after.

**An inro (literally meaning sealed case) is a traditional Japanese case consisting of a stack of small, nested boxes that were used to carry small objects such as seals, tobacco and medicines; the netsuke is a small carving in wood or ivory that keeps the inro securely closed. Japanese men wore traditional Kimono and the inro were worn suspended from the sash for all to see. After humble beginnings as functional items, between the 17th-19th centuries inro and netsuke were developed by some of Japan’s finest craftsmen into miniature works of art. Finely lacquered in gold, rogin and iroe togidashi with details of e-nashiji and kirikane, depicting a full-length portrait of the Kabuki actor Ichikawa Danjuro IX in a Shibaraku role, brandishing a fan, the fantastically large square sleeves of the extravagant costume continuing on the reserve, the interior of rich nashiji; signed with seal Shosai. 7.3cm (2 7/8in). Sold for £92,400

See Jan Dees, Japanese Lacquer Artist, Shirayama Shosai (1853-1923), Arts of Asia magazine, March-April 2002, pp.92-104. In this article, the author lists only ten known inro by the artist. Appointed a Teishitsu gigein (Imperial Court Artist) in 1906, he is one of the most important lacquer artists of the Taisho period. Shosai's works of art are as highly valued as the work of the celebrated Shibata Zeshin but they are much rarer.

The Shibaraku scene is the ultimate confrontation between good and evil in Kabuki, and the most perfect display of the bombastic, stylised aragoto (rough stuff) acting style associated with the Ichikawa Danjuro line of actors. First performed by Danjuro I in 1697, it became obligatory from the early 18th century to include the scene in the opening-of-the-season (kaomise) productions held at every theatre in the 11th month of the year.

Today, a lacquered tonkotsu (tobacco container) and cover by Shibata Zeshin was sold for £96,000 at Bonhams, Fine Japanese Art's sale. 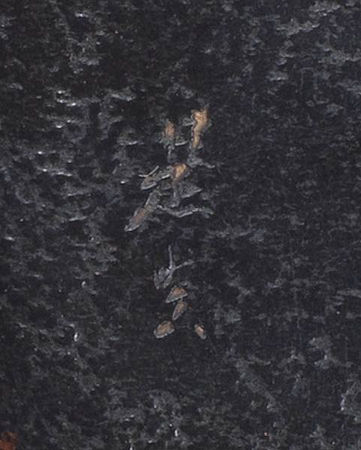 The ishime ground decorated in gold, tan-urushi, keuchi and silver takamakie, hiramakie, kakiwari and sabi-nuri with a gardener's thatched hut with a bamboo blind hanging at the door partially obscuring the interior, where bonsai plants in pots are set on shelves, a pair of potted miniature trees stand to one side of the hut, whilst in the foreground a leaning shelter houses young plants, the reverse with hanging branches of yanagi (willow), signed on the base with lightly-incised characters Zeshin; the cover of mulberry wood; with en-suite lacquer hako-netsuke decorated in silver hiramakie with an egret in the driving rain, the reverse with a leaf drifting between pebbles, rendered in ishimei-ji, imitating stone, signed Zeshin; with wood storage box. 4.9cm x 6.7cm (1 7/8in x 2 5/8in). Sold for £96,000

The gently-rounded shape of this tonkotsu and superb execution of the lacquer is synonymous with Zeshin's craftmanship. A tobacco container with an identical design by the artist, and which may well be the piece offered here, is reproduced in volume 11 of a series of e-hon titled Shikki zuroku (Illustrated Inventory of Lacquer Works), published for members of the Japanese Lacquer Master Association (Nihon shikkokai) from 1891-1914. In these books, well-known lacquer Masters present almost two hundred objects which they especially admire, whilst at the same time providing detailed descriptions (or instructions) of materials and techniques used in the original.

The onshitsu bonsai design was a popular motif for Zeshin and he re-used it to adorn a number of different media from trays, boxes to sagemono as is presented here. A similar treatment of this design can be seen in a lacquer panel by the artist preserved in the collection of the Imperial Household Agency, Sannomaru Shozokan, published and illustrated in the Exhibition Catalogue, The Art of Shibata Zeshin Featuring the Edson Collection, curated by Yasumura Toshinobu (Director, Itabashi Art Museum), Nikkei Inc., 2009, p.118, pl.J-12.