LONDON.- A stunning diamond Fabergé bracelet is one of the highlights of the Russian Sale, taking place at Bonhams on 8th June at New Bond Street. The bracelet is estimated to sell for £70,000 – 100,000.

Created by senior Fabergé workmaster August Holmström circa 1900, the flexible bracelet is composed of twelve diamond-set sections, mounted with brilliant-cut diamonds. It was bought by the renowned Nobel family, who founded the Nobel Peace Prize, directly from Wartski and has been in the family ever since. 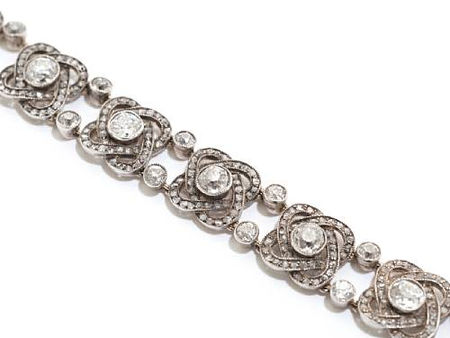 Other Fabergé works of art include a selection of clocks, frames, parasol handles and carved animals. A rare, shaded enamel and silver-gilt kovsh by the Fabergé workmaster Feodor Rückert is estimated to sell for £18,000 – 25,000 and a silver-gilt and shaded enamel salt throne with richly stylised floral motifs also by Rückert is estimated to sell for £30,000 – 40,000. Note: Countess Sophia Hilarionovna Vorontsova-Dashkova married Count Elim Demidov, of the famously wealthy industrial family in 1893. He served as Imperial Russia's last Ambassador to Greece and both remained at the epicentre of White Russian life after the Revolution and up until their deaths in exile in Athens. In 1923, Count Demidov was instrumental in arranging the marriage of his nephew Prince Paul of Yugoslavia to Princess Olga of Greece and Denmark. A superb selection of 19th and early 20th century paintings will also be offered in the sale. A painting entitled “View of the Kremlin from the Moskvoretsky Bridge” by Petr Petrovich Vereshchagin, who is considered one of the most prestigious Russian landscape painters, is estimated to sell for £200,000 – 300,000. A painting by Abram Efimovich Arkhipov circa 1910 entitled “Murom” is also estimated to sell for £200,000 – 300,000. Other artists represented in the sale include Konstantin Makovsky, Philip Maliavin, Ivan Aivazaovsky and Boris Grigoriev.

The Russian Sale will also offer works from the private collection of Louis Shapiro, an American patron of the arts and prolific collector of modern art from the early 1900s to his death in 1947. His collection was particularly orientated towards works by artists from Eastern and Central Europe, Russia and the Ukraine such as David Burliuk and Abraham Walkowitz, who are both represented.