HONG KONG.- The Q Collection is arguably the greatest collection of soapstone figures ever to be offered at auction. The 78 figures represent the personal journey of the collector, who showed remarkable vision in collecting these figures, starting in the late 1970s. They were purchased from top art dealers in USA, Europe and Japan, and also from street markets. One of the rarest examples was purchased for a token sum in Cat Street in the late 1970s.

Soapstone, or shoushan stone, is produced in South East China near to Fuzhou city. Prized throughout Chinese history, attractive to the eye and highly tangible, it was somewhat overlooked by collectors of Chinese art in the 20th century, who focused on porcelain and jade. Now however, there will be great interest from new Chinese collectors looking for pieces of quality and provenance.

Julian King, Head of Fine Chinese Ceramics and Works of Art, comments:“This is an unparalleled opportunity for collectors to acquire soapstone figures of the highest quality with impeccable provenance”. The exquisite stone of a rich orange-beige colour, sumptuously carved in the form of a luohan depicted seated with a ruyi sceptre in his right hand, his face sensuously rendered with full naturalistic attention, depicted in a serene, slightly humorous expression, with long pendulous ears, gently incised shaven hair, elaborate moustache and prominent brow, adorned in sumptuous robes tied with a long cord at the front, slightly open at the neck, intricately etched at the collar and hems with a broad frieze of meandering floral scroll against a wave ground, the sides and reverse with additional circular florettes enclosing additional floral scroll, interspersed by stylised cloud scroll, the head of the ruyi sceptre carved with a stylised taotie mask, the handle carved with gently incised scroll lines and inlaid with semi-precious stones, all resting on an elaborate russet and ochre dais simulating rockwork. 20.2cm high. Estimate: HK$2,000,000 - 3,000,000, US$ 260,000 - 390,000

The extraordinary size and quality of the carving on this luohan marks it out as among the most outstanding figural carvings of the early Qing dynasty. To find a boulder of such magnitude and such fine colour would have been difficult, making the figure an expensive commission. The skill of the artisan is apparent in the exquisite naturalistic attention on the luohan's face, and in the high quality foliate decoration on the robes.

The image of a luohan with a ruyi appears in literati and court paintings of the early to mid Qing dynasty, including the famous court painting by Jin Tingbiao (active in the Qianlong period), preserved in the Palace Museum, Beijing (fig.1), where as with the current lot, the name of the luohan is unidentified. 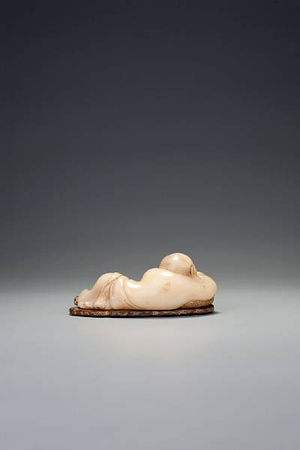 The 'furong' stone of an attractive translucent beige colour, exquisitely carved in the form of Budai depicted in a reclining position, his features naturalistically rendered with extraordinary detail, his close-cropped, stubbly hair delicately stippled, his broad smiling face finely cut and incised, his chin resting on his bare right forearm which is folded over his left arm, the hems on his plain, loose coat incised and gilded, his left, rope-sandalled foot protruding from the hem of his robe, the bundle on which he is leaning tied in a loose knot, the brocade cloth carved with a diaper and chi dragons in shaped reserves, and gilded, incised between the shoulders on the reverse in 'bafenshu' with the two- character signature 'shangjun, all supported on a thin cushion of deep maroon-purple Shoushan stone, minutely engraved with lotus scrolls on a wave diaper ground, the edge with a formal gilded lotus scroll and gilded, the underside decorated with a phoenix amidst cloud scrolls and a border of chi dragons. 9.8cm long.. Estimate: HK$2,000,000 - 3,000,000, US$ 260,000 - 390,000 .

As discussed by Gerald Tsang and Hugh Moss, ibid, pg. 84-86, Shangjun is the 'zi' name for Zhou Bin, a native of Zhangzhou in Fujian, historically renowned as the most accomplished of all the known soapstone carvers. Little is known of his exact dates, but it is clear that his craftsmanship was appreciated by the scholar class, and that he expressed himself within their aesthetic. Throughout the Qing period, he was admired, as can be seen from an inscription on a Zhou Bin seal by the late Qing painter Wu Changshuo (1844-1927), 'This stone was carved by Zhou Shangjun, we should especially treasure it'.

In his definitive work on soapstone, Shoushanshi zhi (Records of Shoushan Stone), Fujian, 1982, Fang Zonggui expounds that Zhou Bin's work encapsulated the technique of 'xieyi', the thin, low-relief, painterly style of carving. 'Xieyi' literally translates as 'idea painting', but in literati eyes, through its association with a free, expressionist style, it transcended the medium of sculpture and became associated with the higher art of painting, thereby assuming the potential for profundity. Rather than focusing on the sheer technical skill that is evident in the current sculpture, Fang refers to Zhou Bin's work as being in a simple and rustic style, a compliment reserved for the highest levels of literati painting and calligraphy. Fundamentally, in the eyes of the literati class, the important impression from a masterpiece of Zhou Bin, such as the current sculpture, is not the quality of the carving, but of the meaning conveyed through the profundity of his expression.

Only a small number of figural sculptures by Zhou Bin are recorded in museum and private collections, of which the current lot is arguably one of the finest. The furong stone is an exquisite colour; the carving is strong and supple, with extraordinary sensitive and naturalistic details; the incised designs on the textiles are superb in their execution.

All the known figural carvings by Zhou Bin are clearly individual works of art, sharing certain qualities of expression, incised designs on the robe and style of carving, but fundamentally different from each other. These include: The exquisitely carved luohan depicted seated on a simulated rockwork cushion, the figure carved from 'gaoshan' stone of a mottled caramel and beige colour, highlighted with attractive russet blushes, his facial features sensitively rendered in a noble, relaxed poise, with long pendulous ears and bushy beard, adorned in a loose monastic robe truseed and tied around his shoulder, intricately incised at the hem with a minute floral scroll against a wave ground, the robe further incised around the back with a writhing dragon amidst cloud scroll, and gilded, the simulated rockwork cushion carved from 'yuewei' stone of a rich brown colour, intricately carved of quatrefoil form with eight circular medallions enclosing incised and gilded dragons, the cushion enclosed in pierced and carved simulated branches, the underside inscribed 'weiru fenjuan' in bold lishu script. 10.5cm (including cushion) high. Estimate: HK$1,500,000 - 2,500,000, US$ 190,000 - 320,000

Wei Rufen does not appear to be recorded in literature, which may be because his work was confined to figural carvings rather than seal carvings. However, the small number of known figures pay testament to a carver of outstanding skill, equal if not better than the renowned carvers Zhou Bin and Yang Yuxuan, with the ability to render naturalistic detail with exquisite detail creating what are arguably among the greatest examples of figural sculpture in Chinese art.

A figure of Bodhidharma of comparable quality is preserved in the Shanghai Museum, a gift of Hu Ruizhi, carved in brownish-green stone, marginally larger than the current figure at 10.7cm. It is illustrated by Shen Zhiyu, ed., The Shanghai Museum of Art, New York, 1983, no.208; and also by Robert D. Mowry, Objects from the Chinese Scholar's Studio. Examples from the Shanghai Museum, Orientations, August 1987, p.24, fig. 14 (fig.1).