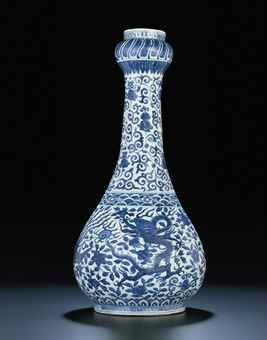 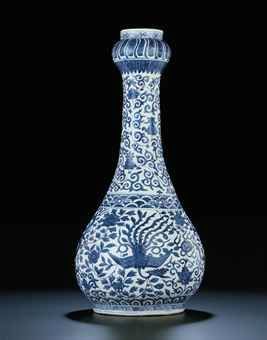 The globular body painted in inky-blue tones on each side with a sinuous five-clawed horned ascending dragon flanked by a pair of descending phoenix in flight, confronting a 'flaming pearl' reserved on a ground of loose composite floral meander, above a border of prunus flowerheads on a wave ground, and keyfret around the foot, the tall neck with lotus flowers each supporting one of the eight Buddhist emblems bajixiang borne on scrolling vine below stylised lappet bands around the bulbous mouth, and a band of scrolls encircling the straight rim either side of the reign mark written in a line; 21 3/4 in. (55.2 cm.) high. Estimate HK$7,000,000 - HK$9,000,000 ($904,002 - $1,162,289). Price Realized HK$11,972,000 ($1,546,110)

Notes: This very rare vase ranks among the finest examples of a group of imperial Wanli vases of similar form and size decorated either in blue and white or in the wucai palette with variations on the theme of dragons or phoenix. No other vase of this exact form and decoration appears to have been published although a number of wucai examples similarly decorated around the lower body with dragons and phoenix are known. Compare a vase in the National Palace Museum, Taipei, illustrated in Enamelled Ware of the Ming Dynasty, Book III, CAFA, Hong Kong, 1966, p. 31, pl. 1; another, with very similar decoration to the current vase to both the neck and body but with differences to the minor decorative bands was included in the Chang Foundation exhibition Selected Chinese ceramics from the Han to the Qing Dynasties, Chang Foundation, Taipei, 1990, p. 256

A number of blue and white vases of the same form with two pairs of dragons contesting 'flaming pearls' rather than pairs of dragons and phoenix are also published including an example illustrated in Ancient Chinese Arts in the Idemitsu Collection, Japan, 1989, no. 745. Another was sold at Christie's London, 28 March 1996, lot 343.
Christie's . Inspired Connoisseurship: Property from a European Collection , 1 June 2011 , Convention Hall www.chisties.com
Posté par Alain Truong à 09:11 - Chinese Ceramics & Works of Art - Commentaires [0] - Permalien [#]
Tags : 'dragon and phoenix', Blue and White, garlic-headed vase, Ming, suantouping, Wanli six-character marks and of the period