A rare large reverse-decorated blue and white dish. Yongzheng six-character mark within double-circles and of the period

A rare large reverse-decorated blue and white dish. Yongzheng six-character mark within double-circles and of the period 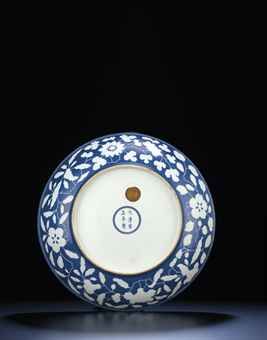 Notes: A number of Yongzheng dishes of this design have been published including one in the Metropolitan Museum of Art, New York, illustrated by S. Valenstein, A Handbook of Chinese Ceramics, New York, 1989, pl. 248; one in the Tokyo National Museum, illustrated in Oriental Ceramics, Kodansha Series, vol. 1, Tokyo, fig. 160; one published by R. Krahl, Chinese Ceramics from the Meiyintang Collection, London, 1994, vol. 2, no. 843, later sold at Sotheby's Hong Kong, 7 April 2011, lot 75; one in the Chang Foundation, Taipei, illustrated in Chinese Ceramics from Han to Qing Dynasties, Taipei, 1990, pl. 127; one included in the Min Chiu Society exhibition, Splendour of the Qing Dynasty, Hong Kong Museum of Art, 1992, Catalogue no. 133, and subsequently sold at Christie's Hong Kong, 2 November 1999, lot 584; another, also sold at Christie's Hong Kong, The Imperial Sale, 28 April 1996, lot 54; and an example in the National Museum of China Collection, illustrated in Studies of the Collections of the National Museum of China, Shanghai, 2006, no. 42.

For the Ming prototype of this dish, see the reverse-decorated dish from the Xuande period with fruits and flowers, included in the Special Exhibition of Ming Xuande Ceramics, National Palace Museum, Taipei, 1980, Catalogue no. 82.