Money and Beauty. Bankers, Botticelli and the Bonfire of the Vanities, on view @ Palazzo Stro

Money and Beauty. Bankers, Botticelli and the Bonfire of the Vanities, on view @ Palazzo Stro Masterpieces by Botticelli, Beato Angelico, Piero del Pollaiolo, the Della Robbia family, Lorenzo di Credi and Memling – the cream of Renaissance artists – show how the modern banking system developed in parallel with the most important artistic flowering in the history of the Western world. Money and Beauty. Bankers, Botticelli and the Bonfire of the Vanities, on view at Palazzo Strozzi, Florence, from 17 September 2011 to 22 January 2012, explores the links between that unique interweave of high finance, economy and art, and the religious and political upheavals of the time.

The exhibition examines the birth of the modern banking system and the economic boom that it triggered, providing a reconstruction of European life and the continent’s economy from the Middle Ages to the Renaissance. Visitors will be able to delve into the daily life of the families that controlled the banking system and perceive the ongoing clash between spiritual and economic values. The story of the art patrons is closely linked to that of the bankers who financed the ventures of princes and nobles alike and, indeed, it was that very convergence that provided the climate in which some of the leading artists of all time were able to flourish. St Nicholas with the Emperor’s Envoy and The Miraculous Rescue of a Sailing Vessel, 1437 - 1449. Tempera and gold on panel, 34 x 63.5 cm Vatican City, Musei Vaticani

Money and Beauty takes the visitor on a journey to the roots of Florentine power in Europe. It investigates the economic mechanisms which allowed the Florentines to dominate the world of trade and business, five hundred years before modern communication methods were invented, and thereby finance the Renaissance. The exhibition analyses the systems that bankers used to build up their immense fortunes, it illustrates the way in which they handled international relations and it also sheds light on the birth of modern art patronage, which frequently began as a penitential gesture only to turn into a tool for wielding power. The exhibition also uses depictions of episodes in bankers’ daily lives by several leading Flemish artists to illustrate the era when Florence was the financial capital of the world.

Curated by art historian Ludovica Sebregondi, author of Iconography of Girolamo Savonarola, 1495-1998, and Tim Parks, writer, translator and author of Medici Money – Banking, Metaphysics and Art in Fifteenth-century Florence, the exhibition is conceived as a ‘duet’, in which the two curators present different – and sometimes opposing – views of the exhibition’s content. The two curators aim to provide the visitor with an opportunity to look at art from a cross-disciplinary perspective involving economists, politicians and diplomats. It examines the story of how the Florentine Renaissance grew from the supposedly open, but more often actually hidden, relationship between art, power and money. The exhibition has been aided by the historical advice of Francesco Franceschi, Professor of Medieval Studies at the University of Siena, Arezzo, as well as a distinguished scholarly committee that includes Cristina Acidini, Superintendant for the Historic, Artistic, and Ethno-anthropological Heritage and Polo Museale of the City of Florence (Chair); Alessandro Cecchi, Director of the Galleria Palatina and the Boboli Gardens; Dora Liscia, Professor of the History of Applied Art and Goldsmiths’ Work at the University of Florence; Robert Mundell, Nobel Prizewinner (Economics); Beatrice Paolozzi Strozzi, Director of the Museo Nazionale del Bargello; Jacob Rothschild, British investment banker and philanthropist; and Gerhard Wolf, Director of the Kunsthistorisches Institut in Florenz-Max Planck Institut.

Crucial to the theme of the exhibition are the masterpieces created for the great banking families during times of prosperity. However, the fortunes of some of Florence’s great families were rocked by financial setbacks, and the political and religious storm triggered by the preacher Girolamo Savonarola (1452-1498). With his “bonfires of the vanities”, the Dominican friar rejected everything that the Renaissance stood for, even though he was an integral part of it. The exhibition, comprising over one hundred works of art, includes loans from the Vatican Museum, the National Gallery in London, the Groenigemuseum in Bruges, the Germanisches Nationalmuseum in Nuremberg, the Museo Correr in Venice, the Boijmans van Beuningen Museum in Rotterdam, the Bibliothèque Nationale de France in Paris, St Bonaventure University, Olean, New York, and the Poldi Pezzoli Museum in Milan, as well as from the most important museums in Florence (the Uffizi Gallery, the Bargello, and the Museum of San Marco) and several private collections.

A variety of interactive experiences enable the visitor to understand the ways merchants made their profits by moving goods and money around Europe. Using their entry ticket, every visitor can invest 1,000 virtual florins in an interactive game called ‘Follow your Florins’, produced by Italy’s leading graphic novelist Giuseppe Palumbo; there will be tactile and olfactory elements in the exhibition, as well as the ‘Botticelli Code’ game in the special family suitcase. As with all Palazzo Strozzi exhibitions, there will be special labels for families and children, as well as workshops, books and a ‘passport’ to the city’s exhibition-related treasures.

The exhibition is divided into the following sections:

Section 1 – The Florin, Image of Florence in the World 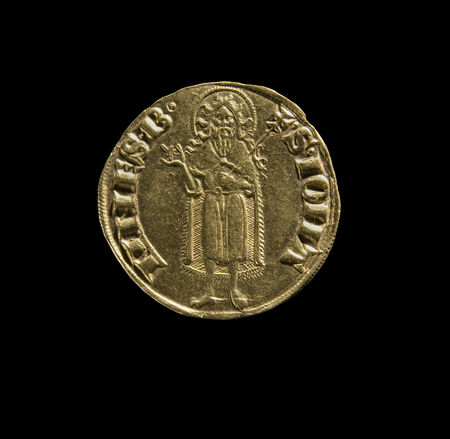 The exhibition opens with the florin, the Florentine gold coin that was minted for the first time in 1252. It was named after the lily depicted on the obverse of the coin, while John the Baptist, the city’s patron saint, appears on the reverse. The imposing 14th century wooden altarpiece made for the Mint, and specially restored for this exhibition, illustrates the importance of this institution, the activity of which was controlled by two of the most important guilds in Florence, the Arte di Calimala and the Arte del Cambio.

Section 2 – Everything has its Price 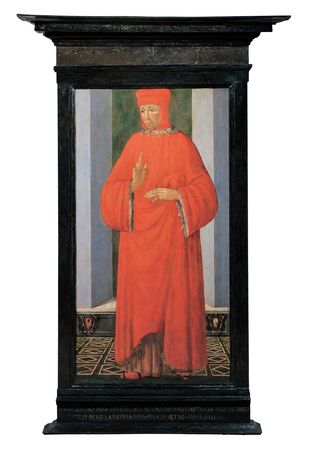 This section is designed to prompt the visitor to reflect on faith and money. Despite the deep sense of religiosity that prevailed at the time, every aspect of life was seen as having a price. The section presents 14th and 15th century works illustrating the approach to religion of such figures as the merchant and banker Francesco Datini (c.1335-1410), and the cost of the objects that accompanied everyday life. The law on usury is seen as a consequence of the tension between traditional religious attitudes and the economic trend towards achieving more widespread affluence. The ban on usury placed restrictions on banking operations, forcing bankers to develop complex financial tools. The role of Jewish moneylenders and the creation of the Monti di Pietà pawnbroking institutions are seen in this context. Works by Orcagna and several Flemish artists show usurers suffering chastisement in Hell, tax collectors, currency dealers and misers in a varied and fascinating set of pictures illustrating the environment in which they conducted their business. Next to them are pictures of the saints who railed against usury in their sermons: St Antoninus and the Blessed Bernardine of Feltre. Section 4 – The Art (and Mystery) of Exchange

This section illustrates the way in which the bill of exchange revolutionised trade, and how the banking world managed to thrive while appearing to comply with the ban on usury. The slow pace of international commerce allowed bankers to make profits that were officially generated by exchange transactions. To gain maximum benefit, banks tended to finance international trade rather than investing locally, which had a major impact on the development of the European economy. At the same time, the international spread of bills of exchange reinforced the banks’ role in gathering funds for the Church. Documents used for making calculations, coins and illuminations and other objects all help to chart international commerce in this section, while multimedia installations allow the visitor to track the trade routes of the time. This section explores the extension of Florentine banking abroad and looks at the severe risks involved in travelling by land and sea. The threat of theft and piracy led travellers to rely on banks providing them with letters of credit in order to avoid having to travel with heavy metal coinage. The section also uses pictures of ships and caravans to illustrate travel and the circulation of goods. Like the ban on usury, the sumptuary laws (restrictions on dress, jewels, feasting, weddings and funerals) were a further restraint on social mobility and the free circulation of wealth, reflecting an attempt by those in power to obstruct the growth of a more mobile and individualistic society. The section displays precious objects and illustrates the kind of things the sumptuary laws prohibited. This section looks at the luxury lifestyle of merchant bankers, as well as exploring the way in which their art commissions shifted from primarily sacred works to secular subjects, and the shift in major patronage in the city from the public to the private sector. Botticelli personified, perhaps better than anyone, the ideal relationship between artist and patron, particularly with the Medici family for whom he was painter and political supporter. Not only portraits but also paintings, sculpture, furnishings, medallions and extremely costly objects in ivory all help to recreate the environment of the leading families and bankers for whom many of the most important Renaissance masterpieces were created. This section analyses the crisis both in the Medici Bank and within the family itself, which coincided with the heyday of Savonarola. The two “bonfires of vanities” that Savonarola organised, with numerous artists (including Botticelli and Lorenzo di Credi) tossing their “lascivious and immoral” works into the flames, marked the end of an era. 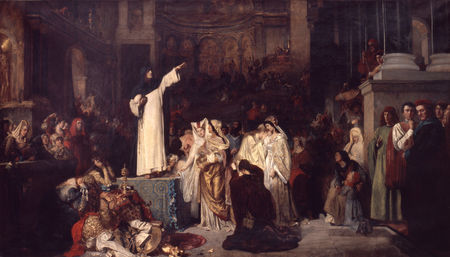 Savonarola Preaching Against Luxury and Preparing the Bonfire of the Vanities, 1881. Oil on canvas, 193.04 x 312.42 cm . Olean, New York, St Bonaventure University, The Regina A. 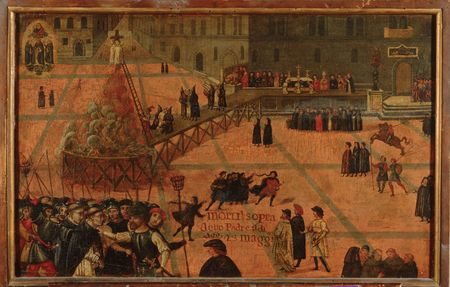