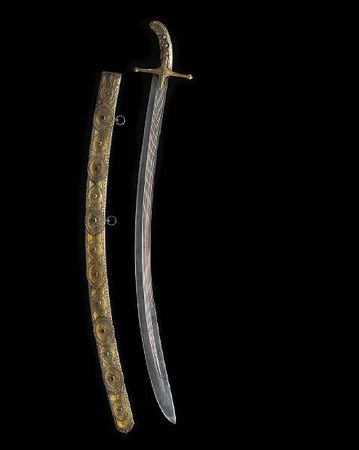 An historic gem-set and gilt silver-mounted Islamic saber attributed to Tipu Sultan and captured at the Siege of Seringapatam in 1799, probably Turkish, 17th century. Photo Bonhams

At its Antique Arms & Armor sale on June 20, 2011 in San Francisco, Bonhams & Butterfields is excited to present a historic gem-set saber, likely 17th century Turkish and originating from Mysore, India during the period of the Tipu Sultan's ruling (est. $15,000-25,000).

The gilt silver-mounted sword boasts an impressive, curved 32½-inch long blade and is adorned with a crossguard chased in floral engravings. As well, the grip on the wide saber is covered with engraved, gilt-silver plates.

The historic saber is accompanied by a gilt-silver plate covered scabbard, which boasts elaborate scrollwork and borders. The front is set with thirteen precious and semi-precious stones and the reverse is covered in dark shagreen and inscribed with the words: "Taken from/Tippoo Saib (sic)/Seringapatam/1799."

The sword's origin points to a robust period in India's history – the 1780's - during which the Tipu Sultan ruled India's strongest, most prosperous state. Tipu was a relentless warrior who inflicted defeats on the British and used Western weaponry against their inventors. He was killed at the siege of Seringapatam in 1799. 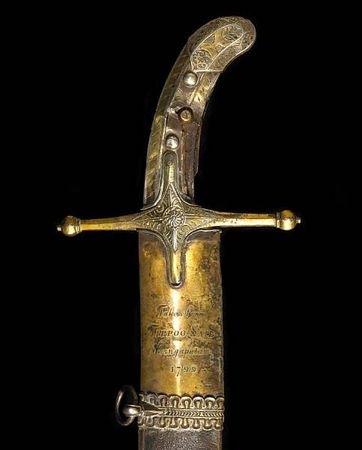 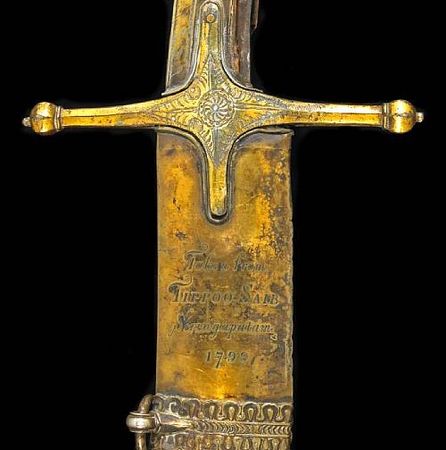 An historic gem-set and gilt silver-mounted Islamic saber attributed to Tipu Sultan and captured at the Siege of Seringapatam in 1799, probably Turkish, 17th century. Photo Bonhams
The broad, curved 32 1/2 inch blade with six narrow fullers below the spine, the upper two terminating at the base of the yelman, the other meeting at a point 4 inches below the blade tip. Gilt crossguard chased with florals, the quillons of hexagonal section extending to domed finials. Grip covered with engraved, gilt-silver plates. The scabbard covered with gilt-silver plates chased with scrollwork and borders, the front set with thirteen badly abraded precious and semi-precious stones. The reverse covered in dark shagreen, the throat inscribed Taken from/Tippoo Saib(sic)/Seringapatam/1799.
Condition: Blade has been cleaned and shows light scratches and some very minor pitting. Hilt with wear to gilt finish, the grip with losses to wood and metal. Scabbard with minor marks and some light wear to gilt finish. Estimate: US$15,000 - 25,000
Provenance: ex-Collection of John Walzzak, the bulk of whose collection was donated to, and is on display at the Muzeum Wojska Polskiego, (Museum of the Polish Army), in Warsaw.
Note: Tipu Sultan (1750-99)
Tipu Sultan or Tipu Sahib was born in Devanhalli on 20th November 1750 to Haider 'Ali (1721-82) and his second wife Fatima, or Fakr-un-Nissa. Haider 'Ali was a soldier, who had risen through the ranks of the Mysore army to the point where he was able to establish himself as de facto ruler, usurping the brothers Nanjaraj and Devraj in 1752. In 1782 Tipu succeeded his father as Sultan of Mysore, which was the strongest, the best governed and the most prosperous state in India. He was killed at the siege of Seringapatam in 1799. His famous throne was broken up as loot and a number of swords and other objects were taken by members of the victorious British forces. For an article of some of these weapons see, Robin Wigington, Souvenir Weaponry From Seringapatam, The Journal of The Arms & Armour Society, Vol.XV, No.3 (March, 1996), pp.141-149.
Bonhams. Arms and Armor, 20 Jun 2011 to 21 Jun 2011, California, San Francisco www.bonhams.com
Posté par : Alain Truong à 09:35 - Arms & Armour - Permalien [#]
Tags : 17th century, Islamic, saber, Tipu Sultan, Turkish