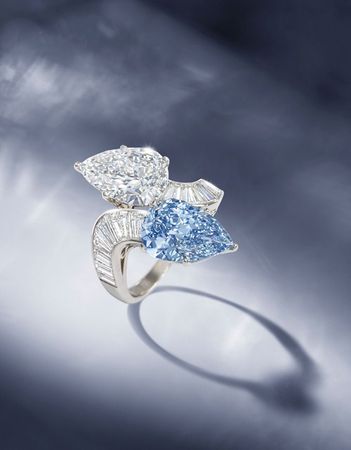 The stunning diamond and blue diamond crossover ring made by Bulgari comes from a private European collector and has never been seen at auction before.

The collector’s father commissioned the ring from the legendary Italian jewellery house as a gift for his wife in the mid 1960s, when Bulgari was at the height of fashion and innovation.

It was a time where the world's rich and famous sought Bulgari’s unique craftsmanship and high quality jewellery designs, including Elizabeth Taylor who bought much of her jewellery there.

Typical of Bulgari’s elegant simplicity, the ring offered by Bonhams is set obliquely with a pear-shaped diamond, weighing 3.93 carats, D colour, VS2 clarity, and a pear-shaped fancy vivid, natural blue diamond (the highest grading for a coloured diamond), weighing 3.72 and SI2 clarity.

The term “fancy” is used to describe a diamond of intense colour and the colour “fancy vivid blue” is one of the rarest. Blue diamonds are structurally the purest of all diamonds, with barely any impurities within their crystal lattice. They account for less than one percent of all diamonds mined.

Jean Ghika, Director of jewellery comments, “Not only is this jewel an exquisite example of Bulgari’s craftsmanship at this period but the fancy vivid blue diamond is an incredibly rare gem in its own right. Bonhams is honoured to have been chosen to handle the sale of this magnificent ring”.
Posté par Alain Truong à 08:01 - Jewelry - Commentaires [0] - Permalien [#]
Tags : Bulgari, Fancy Vivid Blue Diamond, pear-shaped diamond