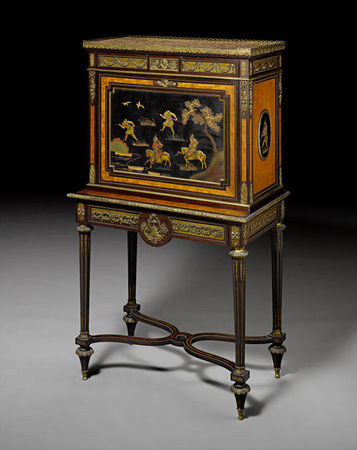 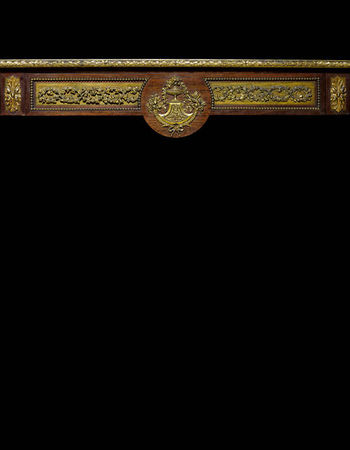 the brocatelle d'Espagne marble top within a pierced drapery gallery, above a long drawer centred by a female mask issuing floral garlands, the fall front with a lacquer panel depicting a group of Samouraï in a landscape, opening to an interior with one shelf and four small drawers with a central pigeon hole, above a frieze drawer with a push release button, each side panel with a lacquer medallion depicting a fisherman, on circular tapering fluted legs, joined by a serpentine stretcher, and toupie feet, 79cm wide, 46.5cm deep, 138cm high (31" wide, 18" deep, 54" high). Estimate: £20,000 - 30,000, US$ 33,000 - 49,000, € 23,000 - 35,000 - Unsold

Note: If the overall design of this secrétaire is inherited from Adam Weisweiler's production, the mounts and especially the pagoda-shaped escutcheon mount with cornucopiae are based on models used by Jean-Henri Riesener.
In the 1860's Charles Guillaume Winckelsen (1812-1871) specialised in this type of pieces, before Henry Dasson succeded him in 1871 and took over the workshop, continuing to make Louis XVI style furniture. By its design as well as its refined quality, the present secretaire can be compared to Winckelsen's work.