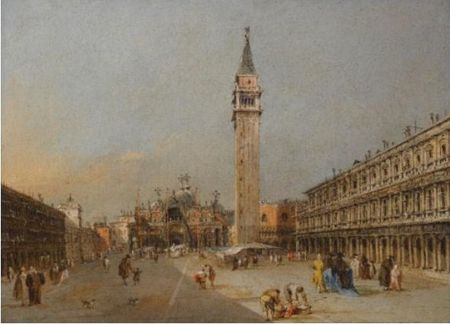 From whom acquired by the present collector in 1967.

NOTE: This beautiful and atmospheric depiction of the Piazza San Marco has been dated 1775-1785 by Antonio Morassi. It is one of a number of such depictions of the famous centre of Venice that the artist completed for his patrons, many of whom were foreigners on the Grand Tour.

The view is taken from San Geminiano across the Piazza towards the elaborate and delicate facade of the Basilica di San Marco. To the left, the Procuratie Vecchie is cast in shadow, which extends into the centre of the square, while to the right, the Procuratie Nuove is bathed in soft light. Some distance in front and to the right of the basilica, the Campanile rises dramatically against the pale blue cloud-speckled sky. A corner of the Doge's palace is just visible to the right of the Campanile. The square is populated by various figures who stroll leisurely together or chat in small groups. Guardi's quick, calligraphic lines and short, almost feathery brushstrokes animate the figures, imbuing them with the appearance of interrupted motion. The two ragazotti in the immediate foreground, bent over their heavy  baskets, are excellent examples of Guardi's figural types. The vibrant red scrap of fabric that one of the men is tucking into his sack provides a beautiful counterpoint to the blues and greys that dominate the composition. By repeating this red in small touches throughout the figures in the Piazza, Guardi not only achieves a harmonious balance to his palette, but also causes his viewer's eye to move between the spots of colour, never remaining static.

Although numerous variations of this view exist, Morassi considered the present work of "qualità eccellente" (see Literature). The loose, free brushwork, light palette and playful effects of atmosphere and colour combine to create a magical, almost ethereal view of one of Venice's best-known landmarks.