LONDON.- An important photography exhibition, Gay Icons, at the National Portrait Gallery will celebrate the contribution of gay people - and the significance of the gay icon - to history and culture. Ten selectors have worked with the Gallery to make their own personal choices of six individuals, their ‘icons’. Not only does this exhibition include many well-known icons, who may or may not be gay themselves, it also reveals some surprises and will encourage a wide audience to think about familiar faces in new ways.

The ‘Gay Icons’ shown in the exhibition will include those people, living or dead, whatever their sexual orientation or interests, who the ten individual selectors regard as inspirational, or as a personal icon. Gay Icons brings together portraits of those people who are regarded as especially significant to each of the selectors, alongside those of the selectors themselves, all prominent gay figures in contemporary culture and society.

Coinciding with the fortieth anniversary of the Stonewall Riots in New York, this exhibition focuses on portraits of both historical and modern figures. The choices provide a fascinating range of inspiring figures – some very famous, some heroic, others relatively unknown. Each icon is presented with information about their personal, and sometimes public, significance, some of it relating to the sitter but much of it linked to the selectors who have been prepared to share their experiences and feelings in their own exhibition texts.

Themes running through the exhibition include inspiration and how the ‘icons’ have inspired each selector in an extremely personal sense to realise their full potential, human rights, stemming from the specific consideration of sexuality, and how this might lead us to consider parallels between the struggles of different minority groups, re-discovery, or rescuing the reputations of figures who might otherwise have been forgotten or, worse, actively disregarded and surprise at some of the perhaps unexpected choices.

The project was developed from an initial proposal made by Bernard Horrocks, Copyright Officer, at the Gallery. The concept quickly evolved to include invitations to ten gay people – each distinguished in different fields – to act as selectors. They were chosen in consultation with their Chair, Sandi Toksvig.

Each selector could freely choose six ‘icons’, although the Gallery decided to limit the choices to photographic portraits, and therefore to subjects who had lived, more or less, within the last 150 years. This also seemed appropriate because within this same period homosexuality was gradually accepted and made legitimate in Britain.

The exhibition project has been led by Pim Baxter, the National Portrait Gallery’s Deputy Director and Communications and Development Director, Peter Funnell, the Gallery’s Curator, 19th Century Portraits and Head of Research Programmes, and Bernard Horrocks, the Gallery’s Copyright Officer.

Sandy Nairne, Director of the National Portrait Gallery, London, says: ‘Gay Icons is an exhibition in which inspiring stories – both private and public – are shared. These are stories of brave lives and significant achievements, told through iconic photographic images chosen by selectors who are themselves icons.’

Olivier Lecomte, President of the Rosé d’Anjou wine-growers syndicate, says: ‘Portraiture is an art which is easy to relate to, cutting across racial, social, sexual, educational and economic barriers whilst enhancing cultural appreciation and awareness. Viticulture shares many of the same values - it blends grape varieties, personalities and culture to create wines which are designed to be enjoyed in a diverse number of ways.’ 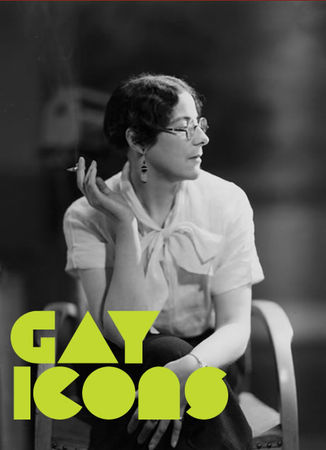