Hong Kong, August 2009 Sotheby’s Hong Kong Autumn Sales 2009 will be held at the Hong Kong Convention and Exhibition Centre from 3 to 8 October 2009. This sales series will offer over 2,300 lots of Modern and Contemporary Chinese and Southeast Asian Art, traditional Chinese paintings, fine Chinese ceramics and works of art as well as jewellery, watches and wine with a total estimate in excess of HK$780 million / US$100 million*. Selected highlights will be showcased during travelling exhibitions across Asia and in New York in August and September, followed by a public exhibition in Hong Kong from 3 to 7 October 2009.

Mr. Kevin Ching, Chief Executive Officer, Sotheby’s Asia, said, “Sotheby’s Hong Kong shall continue its commitment to offer only the very best to Asia and the rest of the world. The forthcoming and thoughtfully curated October sales are set to satisfy the distinctive and diverse taste of our discerning clients and collectors. We are particularly delighted to bring to market a number of outstanding private collections with impeccable provenance. They include fine wines from two outstanding private collections, a private collection of Imperial works of art from the Qianlong reign, as well as exceptional modern Chinese ink paintings and contemporary Chinese art. Collectively our offerings, many of exceptional quality and rarity, shall enthrall the market and collectors alike.”

The estimated total: approaching HK$300 million; total lots: over 200. This season’s sales series features the Water, Pine and Stone Retreat Collection – Qianlong. It encompasses a selected group of over 30 pieces including glassware, metalwork, rhinoceros horn, jade and wood made for the rarefied studios of the Qianlong Emperor. An Imperial Knife with a Rhinoceros Horn Scabbard. Mark and Period of Qianlong, 33 cm. length. Expected to fetch in excess of HK$8 million. photo courtesy Sotheby's

Knife hilts made of rhinoceros horn are extremely rare. The exceptional workmanship and highly decorative quality of this knife suggests that it was produced by the Palace Workshop where military and hunting weapons were made for the emperor and his family.

Other highlights of the auction: 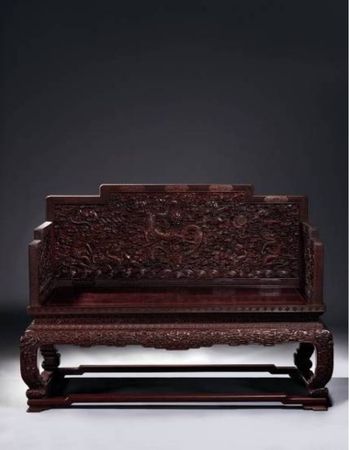 The present Imperial throne ranks among the finest ever produced during the 18th century. The very deep, three-dimensional style of the carving and the style of the dragons can be found on the matching daybed in the collection of the Palace Museum Beijing. Symbolic of Imperial power, thrones were the seats of power where only the Emperor could sit and engage in the business of rulership. This throne is also special for its impressive size (length 140.5 cm) and appears to be one of the largest examples recorded. One other moonflask of this shape, decorated with a full-faced leaping five-clawed dragon, remains in the collection of the Palace Museum Beijing. The form of the present moonflask is an adaptation of early 15th century blue and white flasks, themselves harking back much earlier foreign pilgrim bottles made of leather. Blue and white moonflasks of this shape also exist with other designs, such as dragon and phoenix, and floral scrolls. Imperial patronage in the early Ming dynasty instilled new vigour in the art of carved cinnabar lacquer. The present magnificent large lobed cinnabar lacquer dish, which previously came from a European collection, ranks among the finest lacquer pieces of the period to have come on the market in recent years. Both its superb shape and size are very rare amongst early Ming dish of carved lacquer ware.