Notes: Stretched canvas of the mugshot picture of Elvis from Washington, DC in 1970. Artist Statement on this series: "Pig Portraits is about the glamour in the dark side of crime, fame, sex, drugs and rock and roll. After spending fifteen years as a celebrity photographer and music video director, I was able to see how, and at what points that world and the underworld rub up against each other. So the idea of combining celebrities and criminals came very naturally. Because I'd been engaged in creating and glamorizing a person's image, finding portraits of these people in their worst possible moments, drunk, high, beaten, stripped bare, was very attractive to me. My method of working is to search, destroy and create. The images of this series have been collected from newspaper cuttings, e-bay, long correspondence with police departments throughout the world or even given by celebrities themselves. The idea to create "anti-celebrity" portraits was probably a reaction to my former career. However, they turned out to be even more beautiful and iconic. There is undeniably this attitude that is very real, in your face, a beauty that is hard to ignore. My art is a sort of soundtrack to my life, loves, experiences and influences. These would be my heroes that are missing from Art History." New York 2002 Note: This is a RARE BAT unstretched canvas of the mugshot picture of Johnny Cash, who was arrested in October 1965 at the El Paso International Airport after U.S. Customs agents found hundreds of pep pills and tranquilizers in his luggage as he returned from a trip to Juarez, Mexico. After a night in the county jail and later pleaded guilty to a misdemeanor count, for which he paid a $1000 fine and received a 30-day suspended sentence. 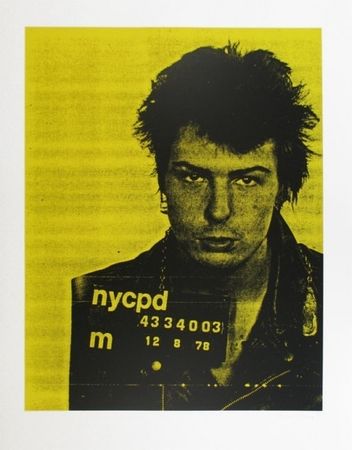 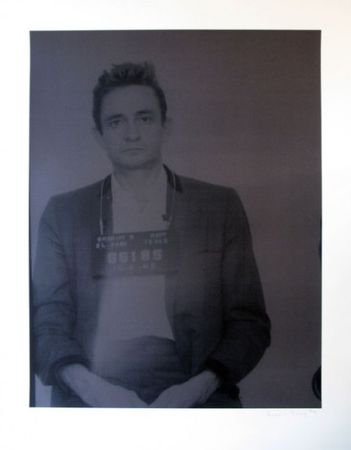 Russell Young (British, b. 1960) has risen to become one of the most collected and sought after artists of our time. Celebrities and collectors from the most discriminating to novice have added Russell’s works to their collections. His larger than life screenprint images from history and popular culture are compelling, daunting, and sexy.