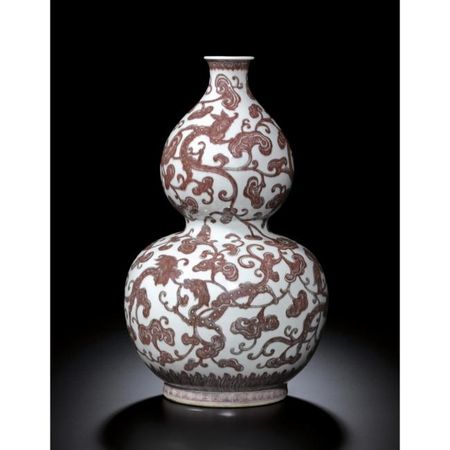 NOTE: Decorated in copper-red with a striking design of nine sinuous dragons crawling amongst lingzhi fungus, this vase is extremely rare and no other example appears to have been published. The technical proficiency of the craftsmen working during the Qianlong reign is evident in the clever application of the highly-temperamental copper pigment through the technique of filling outlines with a multitude of tiny dots, thus creating a rich and sumptuous effect.

The unusual decorative scheme of this piece is found repeated on the body and neck of two Qianlong blue and white vases, but of ovoid form with a long neck and lappet-shaped everted rim; see one sold at Christie's London, 11th July 2006, lot 142 (below); and its companion piece in the National Palace Museum, Taipei, illustrated in Porcelain of the National Palace Museum. Blue-and-White Ware of the Ch'ing Dynasty II, Hong Kong, 1968, pl. 10. The close resemblance of the design and details such as the heads and spotted bodies of both the copper-red and cobalt decorated vases suggest that they may have been decorated by the same hand. Moreover, the high-quality of execution coupled with the depiction of nine dragons suggests that these pieces were created for the exclusive use of the emperor. The inspiration for the design of this vase appears to have come from Yongzheng versions, such as a tianquiping in the Palace Museum, Beijing, illustrated in Kangxi. Yongzheng. Qianlong. Qing Porcelain from the Palace Museum, Beijing, 1989, p. 190, pl. 19, which depicts similarly spotted dragons in copper-red amongst underglaze blue lingzhi branches Although less dense in its composition, the Yongzheng vase reveals the tendency for the copper pigment to bleed into each other, and highlights the ingenious pointillist technique employed on the Qianlong vase.

For the Ming prototype of the stylised dragon and lingzhi fungus, see a guan jar painted with a three-clawed dragon and similarly curling bifurcated tail, with a Xuande reign mark and of the period, included in the Chang Foundation exhibition Xuande Imperial Porcelain Excavated at Jingdezhen, Kaohsiung Museum of Fine Arts, Taipei, 1998, cat. no. 3; and a small jar decorated with a lingzhi scroll, cat. no. 11. Compare also Qianlong double-gourd vases of smaller proportions and no foot, decorated in underglaze blue with a variant of the bifurcated dragons twisting in and out of dense banded clouds, such as two sold in these rooms, 15th May 1990, lot 145; and the other, 20th November 1985, lot 75.

Copper-red decorated vases of this double-gourd form painted with five-clawed dragons amidst swirling clouds and auspicious bats are also known; see one from the collection of T.Y. Chao, included in the exhibition Ming and Ch'ing Porcelain from the Collection of the T.Y. Chao Foundation, Hong Kong Museum of Art, Hong Kong, 1978, cat. no. 781, and sold twice in these rooms, 17th November 1975, lot 222, and again, 18th November 1986, lot 71; and its companion piece sold in our London rooms, 20th June 2001, lot 23, and again in these rooms, 9th October 2007, lot 1216 (below). Compare also vases of this form painted with a dragon-medallion in copper-red; such as a pair in situ in the Suianshi (Room of Finding Peace) in the Yangxing Dian (Hall of Cultivating Mind) in the Forbidden City, Beijing, where the emperor is said to have rested during periods of fasting, published in Qingdai gongting shenghuo. Life in the Forbidden City, Hong Kong, 1985, pl. 177. The many seeds of a double gourd symbolises fertility, and coupled with the proliferation of the lingzhi fungus, this vase represents the wish for longevity and abundance.