Its wide, curving well rising from a flat floor and its exterior walls carved with overlapping lotus petals, the limpid gray-green glaze covering all surfaces except the foot pad. 6 1/4in (16cm) diameter - Sold for $3,965 Thickly potted with a short neck, the compressed globular body surrounded by bands of peony and leaf scrolls above stylized lotus petals, the translucent olive green glaze marked with craze lines and the exposed fabric at the rim and foot pad burnt a cinnamon brown (lacking cover, wear to rim). 11 1/2in (29cm) diameter - Sold for $1,952 The first a Ming Longquan celadon glazed baluster vase carved with a flowering peony branch band above vertical comb marks encircling the walls and visible beneath the crazed sea green glaze (neck restored); the second a Qing quadrilobed dish molded with a chilong roundel and opposing panels of a dragon, lion dog and lotus blossom panels, all beneath a crazed olive green glaze (repaired). 13 1/2in (34.5cm) height of vase; 14 3/4in (37.5cm) height of dish - Sold for $1,952 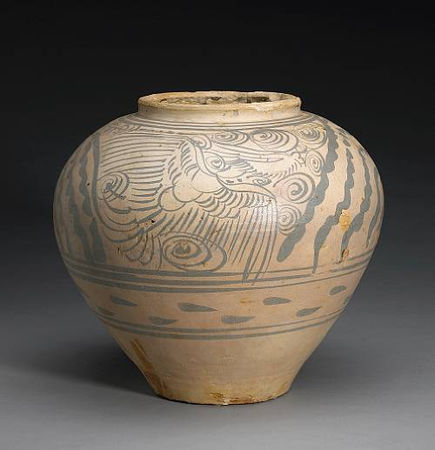 Of compressed globular form, painted to the shoulder and tapering body with alternating reserves of phoenix and clouds in black colored slip on an ivory slip ground (cracked, degraded surfaces). 14 1/2in (37cm) diameter - Estimate: $1,500 - 2,500 Thickly potted with a foliate edge to the wide rim flange, the curving well stamped and incised with a peony flower reserve surrounded by dissolved leaf scrolls all visible beneath the pale gray-green glaze, the recessed base marked with a cinnamon-burnt firing ring (glaze worn). 10 3/8in (26.5cm) diameter - Sold for $1,037 The larger bowl displaying 'hare's fur' markings of chocolate brown and blue-black predominating and only a thin flush of russet; the glaze on the smaller bowl with a 'mirror' black predominating over dark brown extending around the rim. 4 7/8 and 4 5/8in (12.5 and 12cm) diameters - Estimate: $1,000 - 1,500 The first, a shallow dish molded with two fish swimming among lotus and water plants across the well; the second, a deep bowl molded with a design of two babies and pomegranates among flower sprigs; the third, a small vase incised with a band of dissolved and interlaced dragons against combed waves. 7 1/8in (18cm) diameter of the bowl - Sold for $976 The floor of its curving well incised with a dissolved peony flower while lozenge and triangular diaper bands drawn with combed borders encircle the walls and rim flange finished with a foliated edge, all beneath a crazed and dark olive green glaze, the recessed base marked with a cinnamon burnt firing ring (chipped). 12 1/8 (31cm) diameter - Sold for $976 Potted with an indented rim on the exterior surface, the glaze covering the interior of chocolate brown, rust and blue-black where it pools across the floor and, on the exterior walls, where it ends unevenly above the foot in welts. 5in (12.7cm) diameter - Sold for $793

The first a Jianyao tea bowl with dark blue and rust 'hare's fur' markings to its slip glaze; the second a qingbai glazed porcelain vase with foliate rim to its trumpet neck and molded floral reserves to its globular body (rim restored). 7 1/4in (18.5cm) height of vase - Estimate: $500 - 700 Its interior walls impressed with a band of water birds and waves and covered with a shiny glaze except for an unglazed firing ring centering the floor, the glaze extending unevenly onto the exterior walls. 4 1/8in (10.5cm) diameter - Sold for $366