inspired from a Persian metal form, the flattened pear-shaped body rising from an oval spreading foot to an elegant tall-waisted flaring neck, set to one side with an S-shaped spout and to the other with a tall strap handle with ruyi-head terminal, adorned on either side of the body with a large peach-shaped panel enclosing a gold filigree five-clawed scaly dragon in pursuit of a 'flaming pearl' in the form of a large red tourmaline, reserved on an intricate gold wire floral-diaper ground embellished to the edge of the panel with alternating red tourmalines and blue sapphires, all reserved on a ground finely incised with long leafy floral stems framing the panel and with alternating tourmalines and sapphires set in elaborate raised foliate mounts forming the flowerhead, all below further tourmaline and sapphire embellished ruyi bands and quatrefoil panels at the neck, the handle and spout similarly engraved and embellished, the domed cover incised with four leafy floral sprays alternately set in elaborate raised foliate mounts with tourmalines and sapphires and surmounted by an elaborate baroque ruby finial set in a lotus-lappet mount encircled by tourmalines, the cover attached to the handle with a finely linked chain, the base with a nineteen-character inscription Da Ming Wanli nian Yuyongjian zao jiu chengse jin zhong ershijiu liang yi qian, ('Made in the Wanli period of the great Ming dynasty by the Directorate of Imperial Accouterments (Yuyongjian) of 90% pure gold, weighing 29.1 ounces'); 28 cm., 11 in. the gold tested as 18k. Estimate 20,000,000—40,000,000 HKD. Lot Sold 32,020,000 HKD

PROVENANCE: A French Collection (by repute). 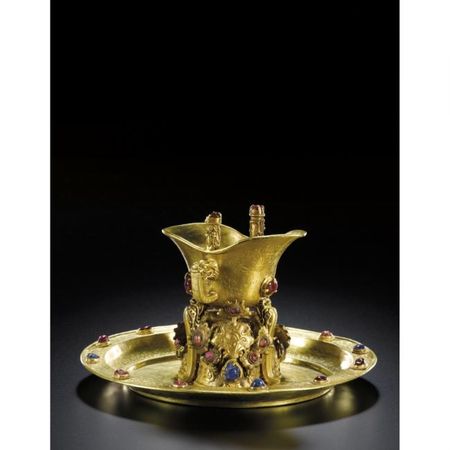 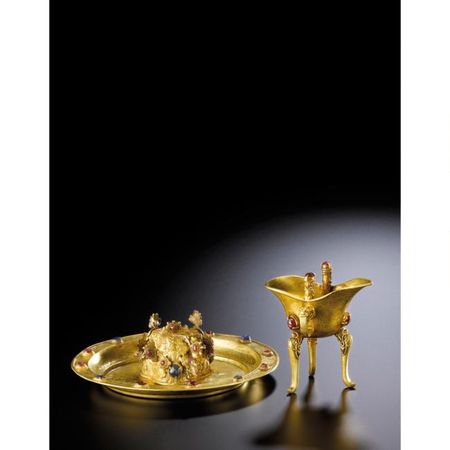 the libation cup with deep U-shaped body flaring at the rim to form a spout at one end, the exterior finely engraved to the underside with a large shou character and at either end with a ferocious scaly dragon, divided by a pair of dragon-head handles and mounted with three red tourmalines, the rim set with a pair of dragon posts, each surmounted by a tourmaline, all supported on three tall splayed dragon legs; the circular dished stand engraved to the interior with a leafy lotus scroll and encircled in the well by a ruyi band, the broad everted lipped rim with simple cloud scrolls divided by alternating sapphires and tourmalines, the central tri-lobed support chased with a foliate medallion and reserved on a cloud scroll and punched ground, set to the face of each lobe with a vase-shaped appliqué with five foliate mounts enclosing tourmalines above a single sapphire, the flat base with sixteen-character inscription Da Ming Wanli xinchou nian Yinzuoju zao jiu chengse kuangjin, ('Made in the xinchou year of Wanli in the great Ming dynasty (1601) by the Jewellry Service (Yinzuoju) of 90% pure gold ore'); jue 10 cm., 4 7/8 in.; stand 17 cm., 6 5/8 in. Estimate 8,000,000—12,000,000 HKD. Lot Sold 11,860,000 HKD