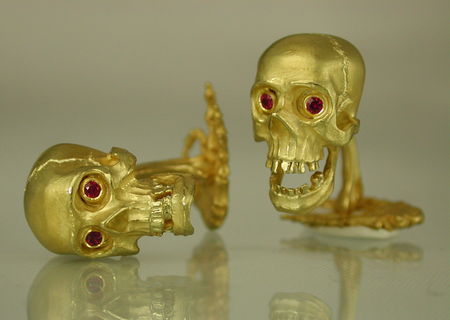 These unique cuff-links are hand-made in 18kt yellow gold. With bezel-set natural, Brilliant-cut fine Burmese Ruby 'eyes'. The design of the connecting backs are composed of two gesturing skeletal hands; one with the universal symbol of Peace and Tranquility, the other with the Jewish symbol of Serenity. Immortalized by Spock in the television series 'Star Trek'. We are proud to present highly collectable art for the art aficionado. The site itself focuses only upon what we feel is the very best edited online art we can find in the world today. Although as with all art its perception is primarily based upon the interpretation and ideas of you the viewer. Height 18mm; Width 11mm; Depth 29mm. Price $2,000