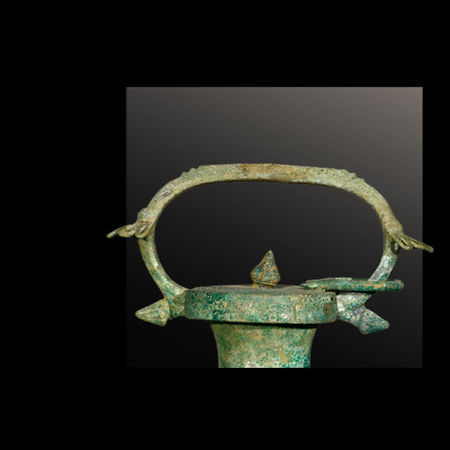 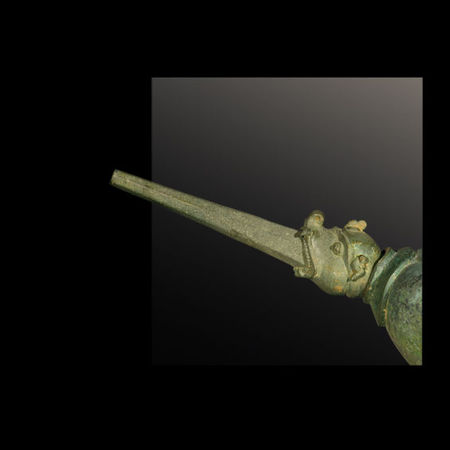 This pitcher with its spout shaped like a makara head from the Giao-Chi era (1st to 3rd centuries CE) is an exceptional object.

Its basic shape is reminiscent of the Hu vases of the Han era, with a flaring foot and a paunchy body. The spout, for its part, is not classical.

It is ornamented at its base by the head of a makara, a monster from the Indian pantheon. From its maw, in which four pointed fangs surround a set of crocodile teeth, erupts the nearly straight spout. The makara’s short trunk, which relates it to the sea cow, is folded back upon itself. Its very bright eyes bring to mind those of a monkey, whereas the ears, stylised and certainly ornamented by earrings, seem to be listening for the slightest sound. A line separates the animal into two parts that join at the eyebrow ridge, forming a slight hump. The top of the head is bedecked with spiralling elements in relief. The highly realistic materialisation of this aquatic animal, through details of extreme precision, makes the piece very dynamic.

The handle is decorated with lotus buds and palmettes, borrowed from the Indian decorative vocabulary. The lid, attached to the handle by a loop that itself ends in animal paws, has a knob also shaped like a lotus bud.

This type of pitcher is already known in ceramic (Cernuschi Museum and the Brussels Museum) as well as in bronze (Metropolitan Museum), all with elephant heads and trunks. The presence of the makara in place of the elephant makes this piece unique: linked to Indian tradition, it refers to the kingdom of Champa, heir in Vietnam to Hindu beliefs and known at the time as Linyi, a kingdom on territory south of Dông Son.

One can compare this piece with the pitcher mentioned in the Cernuschi Museum work Vietnam, Collection vietnamienne du musée Cernuschi (‘Vietnam, The Vietnamese Collection of the Cernuschi Museum’), 2006, p. 94, though its iconographical details are less refined than those of this pitcher, thus allowing a discovery of the influence of this type of creation on ceramics, produced on a larger scale, and an appreciation of numerous similarities in shape and detail. Two other pitchers were exhibited as part of the Baur collections in Geneva in 2008 page 17 of the catalogue ‘Art ancien du Viêtnam, Bronzes et céramiques’ .