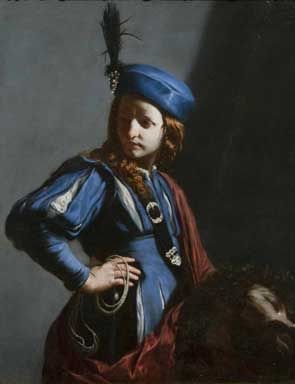 Cagnacci's David will go on view immediately in the premiere presentation Captured Emotions: Baroque Painting in Bologna , 1575-1725, which is on view at the Getty Center though May 3, 2009. The exhibition explores the panorama of Bolognese painting through generous loans from the Staatliche Kunstsammlungen Dresden and various Southern California collections. When Captured Emotions closes in May 2009, Cagnacci's David with the Head of Goliath will go on view in the East Pavilion as an integral part of the Museum's display of masterworks of the Bolognese-Roman school.

Born near Rimini and apprenticed to Guercino in Bologna in his youth, Cagnacci's art was rooted in the Bolognese tradition. Unlike many of Guercino and Guido Reni's other followers, he transcended the lessons of his elders and developed a highly original and personal style. He fused the lessons of Bologna with the chiaroscuro of Caravaggio and the naturalistic manner of Veronese and Correggio. He used a warm, deep, and luminous color palette and dramatic light effects to depict Biblical narratives for both official commissions for the Catholic Church in the first part of his life, and for private patrons, in the latter years, before becoming court painter to Emperor Leopold I in Vienna in 1660.

Around 1645-50, Cagnacci painted David with the Head of Goliath, depicting one of the Bible's most prominent and enduringly popular heroes. David-the young shepherd boy who heroically defeated an 8 foot tall Philistine giant with only a sling and a stone-was a favorite subject for artists from Michelangelo to Donatello to Bernini. The story is so rich with content that artists throughout history have made their paintings and sculptures unique by depicting different moments of this great narrative: Michelangelo portrays David as a muscular man at the moment he decides to battle with Goliath; Bernini shows an equally strong David as he prepares to sling the stone that will bring the giant down; and Donatello depicts David as a victorious-and effeminate-youth, smiling with his foot on top of Goliath's severed head. Cagnacci, instead, chooses to focus his canvas on a scene after David's victory-his triumphant reception upon entering Jerusalem . The nude shepherd boy in Michelangelo, Bernini, and Donatello's versions has been replaced by a young man in sumptuous Baroque attire-based on the biblical scene described in 1 Samuel 18:4 when Jonathan gives David his cloak and garments before he returns to the city for his hero's welcome and follows the tradition of great history painters like Paolo Veronese, who frequently outfitted his protagonists in luxurious contemporary costumes.

In Cagnacci's composition, David cradles the severed head of Goliath in his left arm and the sling he used to slay the giant dangles from his right. From the biblical account, we can infer that he is surrounded by the Israelite women at this moment-singing his praises and elevating his greatness above King Saul-which ultimately arouses the King's ire and jealousy. Cagnacci's superb psychological perception captures the instant of David's self-recognition and premonition, as the consequences of his new stature as a military hero and his future as the leader of the Israelites are dawning on him. He is not the proud and naive boy of Donatello or the strong, composed man of Michelangelo; he is a boy at the moment of truth, as he is about to become an adult.