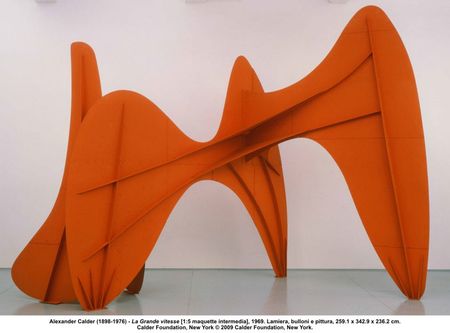 ROME.- From October 23, 2009 to February 14, 2010 for the first time in Rome a major one-man exhibition featuring works by Alexander Calder will be held at the Palazzo delle Esposizioni. His famous Mobiles and Stabiles, wire sculptures, gouaches, drawings and oil paintings will be presented in an exhibition exploring the fundamental stages of the artist's creative cycle, organised by Alexander S.C. Rower, Chairman of the Calder Foundation in New York, with the Terra Foundation for American Art and sponsored by BNL and Lottomatica.

"Why must art be static? You look at an abstraction, sculptured or painted, an entirely exciting arrangement of planes, spheres, nuclei, entirely without meaning. It would be perfect but it is always still. The next step in sculpture is motion" explained Alexander Calder in an interview for the "New York World Telegram" in 1932 presenting his Mobiles, the most significant expressive innovation of the modern era. In these sculptures, which were to become enormously popular, the artist harmonically fused shape, colour and movement into an essential whole, which he himself saw as a "universe" where "each element can move, shift and oscillate back and forth in a changing relationship with each of the other elements".

Alexander Calder (Lawton, Philadelphia 1898- New York 1976), second child of a sculptor and a painter, first began to create toys and jewellery at the age of 8. An artistic genius who also majored in engineering, he is acknowledged as one of the most revolutionary artists of the 20th century. The exhibition at the Palazzo delle Esposizioni will document Calder's entire creative cycle through a selection of his most important works along with some aspects of his work less known to the general public. The exhibition will open with figurative early works including oil paintings, gouaches and wire sculptures to continue with bronze figures produced in the 1930s, the discovery of Abstract art and the invention of Mobiles and Stabiles.

The early years, marked by long periods in Paris and firm friendships with Léger, Duchamp, Miró, Mondrian and other representatives of the Avant-Garde movement, will be explored through masterpieces such as Romulus and Remus from the Whitney Museum (a very significant presence in Rome!), Hercules and Lion and Circus Scene, wire sculptures in which the artist experiments with the first forms in motion in a playful, ironical dimension.

The general public has rarely been offered the opportunity to view the group of small bronze figures created by Calder in Paris around 1930 showing acrobats and contortionists modelled from original gesso forms, enabling visitors to see how the artist resorted to different techniques to experiment in expressing the notion of movement.

The famous Croisière sculture dated 1931, and others of the same period, testify to how he embraced the Abstract movement after paying a visit to Mondrian's studio in Paris in October 1930. In some examples of this significant group of works, christened Mobiles by Duchamp, for the first time movement is caused by contingent or atmospheric forces.

Calder's surrealist vein is evident in some of the masterpieces produced in the mid-Thirties, such as Gibraltar from the MoMA of New York and the sculpture titled Tightrope from the Calder Foundation, on view in the principal exhibitions of Calder's works since the Forties.

Some of Calder's most celebrated Mobiles are among the great attractions of the exhibition in Rome, from Untitled, dated 1933 and one of the first examples of a Mobile, to 13 Spines, dated 1940 and now in the Ludwig Museum, Cologne, Roxbury Flurry, 1946 and Big Red, 1959, from the Whitney Museum in New York, Cascading Flowers, 1949, from the National Gallery of Art in Washington, Le 31 Janvier, 1950, from the Centre Pompidou, Paris, The Y, 1960, from the Menil Collection in Houston. Visitors will also be able to view the monumental Mobile (over 8 metres in diameter) permanently located inside Pittsburgh airport and exceptionally on loan for the exhibition at the Palazzo delle Esposizioni.

The invention of the Mobile was only one of his revolutionary results. In the Thirties he created the first Stabiles, static sculptures that were given their name by Jean Arp to underline their non-kinetic nature of works "that you must walk around or pass through", unlike Mobiles who "dance in front of you". Colourful, exuberantly vigorous sculptures and monumental geometric abstractions such as La Grande vitesse, Sabot and Spiny will all be on view.

Calder introduced a new concept of sculpture based on the idea of movement, open space and transparency, expressed in yet another exceptional form in the monumental Stabiles. In these works Calder gives a new meaning to the concept of "public" sculpture by creating large-scale works that fit in perfectly with their settings. The exhibition will include the maquettes for some of these monumental sculptures, which have become so popular as to become prestigious emblems of many cities throughout the world. Among them the model for the Teodelapio in Spoleto from the MoMA in New York and the maquettes of Jerusalem and Man.