NOTE: A closely related glass censer is illustrated in Claudia Brown and Donald Rabiner, Clear as Crystal, Red as Flame, New York, 1990, pl. 34. Compare also a pink glass censer decorated with gilded floral design and part of a three-piece set published in Luster of Autumn Water, Beijing, 2004, pl. 118, together with another three-piece set that contains a blue glass censer, pl. 117; and an imperial yellow-glass censer included in the exhibition Elegance and Radiance, The Art Gallery, The Chinese University of Hong Kong, 2000, pl. 54; together with one in the same colour as the present example, pl. 55. See also a realgar glass censer included in this collection, below; another turquoise glass censer of this form and with a similar mark sold at Christie's Hong Kong, 30th April 2000, lot 508; and two related versions in yellow included in the Min Chiu Society Thirty-fifth Anniversary exhibition In Pursuit of Antiquity, Taipei, 1995, cat. no. 207. 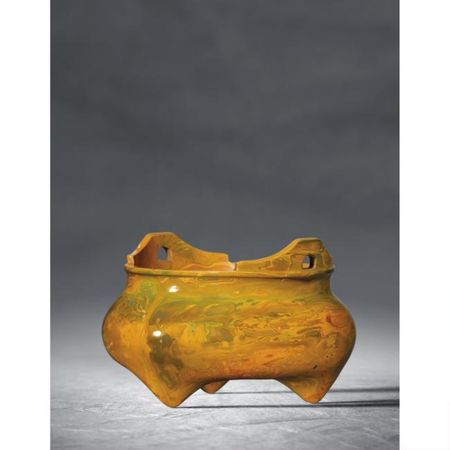 NOTE: A variety of glass vessels were made during the Qianlong period simulating the striking orange-red coloured arsenic sulphide mineral 'realgar'. The naturalistic pattern achieved on realgar glass makes vessels of this type attractive and unique. Hugh Moss and Gerard Tsang in Arts from the Scholar's Studio, Hong Kong, 1986, p. 126, note that the swirling patterns visible at the surface of a mallet realgar glass vase 'are full of possibilities for the imaginative mind. It may read as a landscape, drifting incense smoke or a variety of strange living creatures, but it also represents the endlessly changing patterns of energy from which all phenomena emanate in the Chinese view, particularly expressed by Daoism. To the Daoist scholar it would be a work of art of subtle complexity and endless fascination, to be appreciated like incense smoke as meditative aid.'

An interesting aspect of realgar glass is that it may possibly be one of the earliest types of glass made in the Imperial Palace Workshop known as the Glassworks. Richard John Lynn in 'Technical aspects and connoisseurship of snuff bottles: Late traditional Chinese sources', JICSBS, Summer, 1995, p. 8, mentions Zhou Jixu, a late Qing connoisseur, who described realgar glass as consisting of 'blotches of yellow arbitrarily pulled together'. For a discussion of the possible imperial origins and dating of realgar glass see Hugh Moss, Victor Graham and Ka Bo Tsang, A Treasury of Chinese Snuff Bottles. The Mary and George Bloch Collection, vol. 5, Hong Kong, 2000, pp. 138-146, where it is suggested that it was the product of the Court from the early 18th century onwards and possibly a Courtly prerogative or secret for some decades.

Realgar glass vessels can be found in a number of museums and private collections; for example see a mallet vase, from the Qing Court collection and still in Beijing, included in Luster of Autumn Water, Beijing, 2004, pl. 25; two pieces from the Water, Pine and Stone Retreat Collection a mallet vase and a dish both sold in these rooms, 8th October 2009, lots 1801 and 1819 respectively; and a hexafoil vase, from the Sloane collection published in R. Soame Jenyns, Chinese Art. The Minor Arts II, London, 1965, pl. 81, together with a realgar glass snuff bottle, pl. 201f. The Sloane collection also contains two realgar glass cups and a bowl.

For examples of glass censers of similar form to the present piece, see one made in opaque turquoise glass in the current sale, above; another one from the collection of Robert Hatfield Ellsworth illustrated in Claudia Brown and Donald Rabiner, Clear as Crystal, Red as Flame, New York, 1990, pl. 34; a pink glass censer decorated with gilded floral design and part of a three-piece set published in Luster of Autumn Water, op. cit., pl. 118, together with another three-piece set that contains a blue glass censer, pl. 117; and a fourth yellow-glass censer included in the exhibition Elegance and Radiance, The Art Gallery, The Chinese University of Hong Kong, 2000, pl. 54.