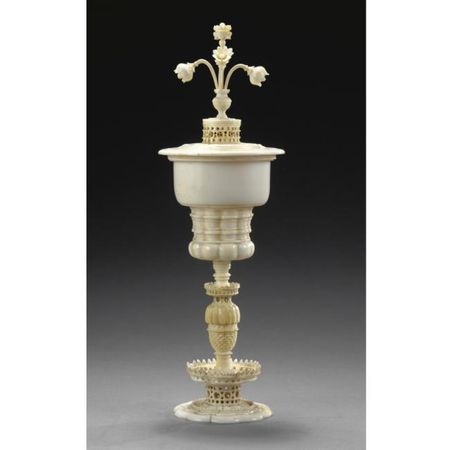 NOTE: These two intricately turned ivory cups (see also lot 100) are excellent examples of a noble tradition in European art. The turner's lathe captured the imagination of the aristocracy from the late Renaissance through to the 18th century. The remarkable manipulations of the ivory represented man's conquest over nature. The more complicated the turned ivory object was, the greater the fascination became for both sculptor and collector. In the 17th century the turning of such ivories became a favourite pastime of princes, who would employ master turners as their teachers. By the 18th century the popularity of the craft had spread and many of Europe's aristocrats were using newly published manuals (such as the ones by Plumer from 1701 and Bergeron from 1796) for instruction and inspiration. For a cup turned in a similar style see lot 287 from Sotheby's Die Sammlung der Margrafen von Baden sale on 5-21 October 1995.