A rare diamond and pearl bow brooch, by Cartier, circa 1960. photo Bonhams

Note: Accompanied by an AnchorCert certificate stating that both pearls were found to be natural and of saltwater origin. Certificate number 1/18398, dated 8th September 2009. Note: The 1930s was a decade of tremendous creativity and technical innovation for Cartier. The return in dress to a more waisted silhouette made the long sautoirs of the 1920s look outmoded so Cartier created short collar necklaces to complement the latest fashions. The deceptively simple design of this necklace, which also follows the 1930s move towards a pure "white" look, is belied by the combination of differently cut stones, in a number of different settings, in fluid "vertical scroll" motifs. Many necklaces of this period also integrated detachable clip brooches and some could also be worn as "halo" head ornaments, another of Cartier's innovations. A diamond bracelet, by Cartier, circa 1935. photo Bonhams A pair of sapphire and diamond pendent earclips, by Cartier, circa 1960. photo Bonhams

She was born in Israel and educated in New York and France and from a young age studied dance and drama. During one of her school vacations, she was hired by a dance company and spent the summer dancing and presenting in one of Nat King Cole's Las Vegas shows.

On a trip to Los Angeles to visit relatives, Lita Milan was signed by legendary Hollywood agent, Paul Kohner who also managed the careers of Marlene Dietrich, Greta Garbo, Billy Wilder, Henry Fonda, David Niven, Ingmar Bergman and Lana Turner. Her success in "The Violent Man" with Barbara Stanwyck, Glenn Ford and Edward G. Robinson, propelled her to stardom and she was contracted by Columbia Studios. Leading roles followed and she starred in "The Ride Back" opposite Anthony Quinn, "Never Love a Stranger" opposite Steve McQueen and "The Left Handed Gun" opposite Paul Newman.

In the early 1960s, Milan abruptly abandoned her career to run off with Ramfis Trujillo, son of Dominican Republic dictator Rafael Leónidas Trujillo Molina. After Trujillo's death in a car accident, Milan settled in Spain in order to raise her two children. She subsequently had a long relationship with one of Spain's most famous bull fighters and today lives just outside Madrid where she plays a dynamic role in intellectual and artistic society. 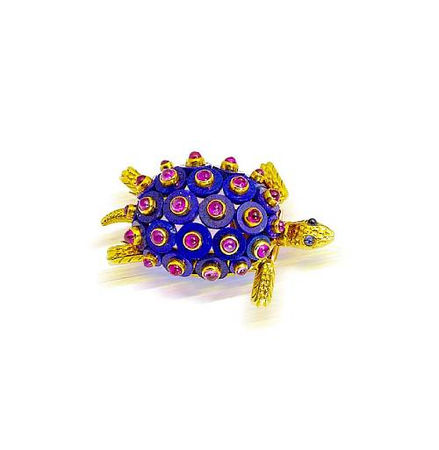 A lapis lazuli, ruby and sapphire tortoise brooch, by Cartier, circa 1965. photo Bonhams