the deity seated on a raised platform draped with a tiger skin, wearing armour under his long flowing robes belted at his chest, his face with a stern expression and surmounted by an official cap with two tassels falling on his shoulders, covered overall with a cream ivory glaze; 23.8cm., 9 3/8 in. Estimate 3,000—5,000 GBP. Lot Sold 15,000 GBP 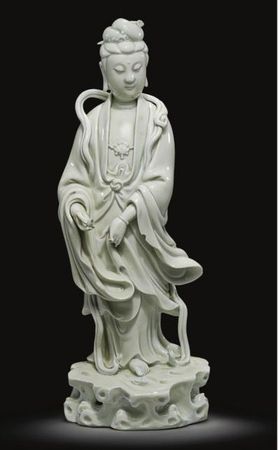 standing on a rocky plinth, dressed in long flowing robes billowing in the wind and open at the chest to reveal an elaborate beaded necklace from which a lotus pendant hangs, her hands probably holding the scroll of wisdom which is now missing, her face serene and her hair piled high in a chignon held with a ruyi  pin, applied overall with a milky-white glaze; 35.3cm., 13 7/8 in. Estimate 5,000—7,000 GBP. Lot Sold 6,250 GBP seated on a jagged rock plinth with the left leg raised in lalitasana, the figure dressed in loose fitted robes opening at the chest, his hands clasped beneath the voluminous folds of his long layered robes above his raised knee, his head slightly turned to the right with finely defined features and penetrating gaze, the heavy brows and beard with tight curls; 15.5cm., 6 1/8 in. Estimate 4,000—6,000 GBP.. Lot Sold 6,250 GBP of compressed pear shape rising from a short foot to a tall cylindrical neck and a slightly bulging mouth, the shoulder and slender neck entwined with a chilong with a bifurcated tail grasping a lingzhi branch between its jaws, covered overall with a creamy ivory glaze; 10.3cm., 4 3/8 in. Estimate 2,000—3,000 GBP. Lot Sold 2,500 GBP

PROVENANCE: Collection of Frank Caro, successor to C.T. Loo, C 3898 (according to label).