HONG KONG.- The Fine Chinese Ceramics and Works of Art auction features a cornucopia of works of art from the sublime to niche collectibles, reflecting the rich diversity of China's Imperial and artistic output.

Chinese Jades from the Collection of John and Berthe Ford

The name Ford is famous in Himalayan art, but only close friends and relatives would have been aware of the collection of Chinese decorative art begun by his godfather Edward O'Dell in the 1930s, and continued right up to the present day by his protégée. Many of the larger vessels at the Bonhams auction were purchased by O'Dell at the great liquidation sale of Yamanaka & Co., held at Parke-Bernet Galleries, New York, from 24-27 May 1944. The others were acquired by O'Dell and Ford from galleries they visited on their extensive international travels.

This is an extraordinary comprehensive collection of 207 ancient Chinese bronze weapons, formed by a Western connoisseur, resident in Hong Kong, over a 20-year period. The highlights of the collection were included in the groundbreaking exhibition 'Ancient Chinese Weapons' at the Museum of Coastal Defense, Hong Kong. The collection will be sold without reserve.

Julian King, Head of Chinese Ceramics and Works of Art, comments: "This is a unique auction in Hong Kong as auctions normally focus on antiques from the Ming and QIng dynasties. The owner has taken the decision to offer the weapons without reserve, which provides an unparalleled opportunity for collectors to purchase ancient bronze weapons with outstanding provenance. Some of the Warring States swords would be sold for up to US$50,000 on the international market, making this an auction not to be missed for collectors interested in Chinese ancient bronzes". 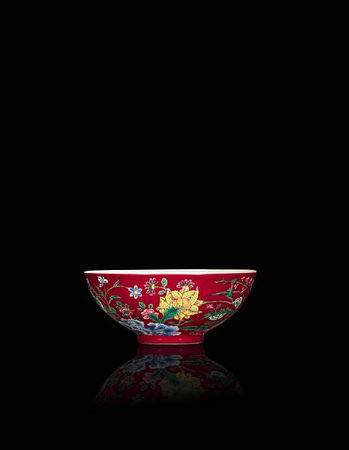 Extremely finely potted, with shallow rounded sides rising from a short straight foot, delicately painted in brilliant 'yangcai' enamels, the details picked out in black, with chrysanthemum, mallow, various peonies, yellow day lily and various other flowers, all reserved on a rich ruby-red ground, the interior and base glazed white, the base inscribed with the four-character mark in underglaze-blue within a double square. 9.1cm diam. Estimate: HK$2,000,000 - 4,000,000, US$ 260,000 - 510,000

A bowl of almost identical size and design from the Qing Court collection, preserved in the National Palace Museum, Taipei, is illustrated in Harmony and Integrity: The Yongzheng Emperor and His Times, Taipei, 2009, pg. 215, pl. II-41 (fig.1), and discussed by Yu Peijin, who expounds that the ruby-ground enamel on the bowl is exactly that recorded as 'xiyang hongse' (literally 'Western red') on the Taocheng jishi pei, the calligraphy written on the death of Tang Yin, the Imperial supervisor of porcelain at Jingdezhen from 1728-1756. Each of square section and carved from many conjoint pieces of ivory, the large baluster-shaped vase with gently tapering sides and four vertical panels, exquisitely carved in high-relief with extensive scenes of deities and figures travelling or engaging in leisurely pursuits: one vase with a male deity riding on a twin-wheeled carriage pulled by a dragon with his entourage, a female deity walking amongst clouds with attendants demounting her palanquin carriage pulled by three dragons, a male deity riding on a Buddhist lion holding a lotus spring with his entourage, a group of deities bringing forth magical gifts, the gourd spewing-forth a cloud of smoke with three bats; the other vase with the Queen Mother of the West, Xiwangmu, arriving and greeted warmly at her abode in the Kunlun Mountains riding on a phoenix with attendants carrying a peach box with the fruits of longevity, a scene of three male deities as guests indulging in provisions well-served by female attendants, an old male deity travelling on a dragon with his band of followers, three male deities warmly greeted at the reception by a group of female attendants bearing baskets of flowers, the towering vase standing firm on four sturdy feet, rising to a stepped shoulder and a straight neck, flaring to a straight everted lip, the neck flanked by a pair of heavenly apsaras holding baskets of flowers and a pair of taotie handles suspending loose rings, the cartouches framed by intricately carved auspicious objects bajixiang, all on an archaistic geometric ground with stylised lotus scrolls. 42.5cm high. (2). Estimate: HK$1,800,000 - 2,500,000, US$ 230,000 - 320,000 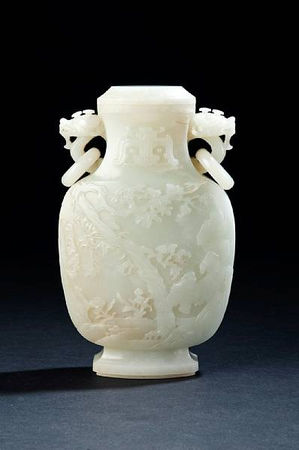 The even white stone intricately worked in the form of a flattened hu-shaped vase, rising from a splayed foot to high shoulders, the waisted neck flaring to a galleried rim, surmounted by a plain cover, flanked by a pair of stylised dragon heads suspending loose rings, the body superbly worked with a continuous landscape scene of luxuriant branches of flowers issuing from rockwork, the foot with a keyfret border, the neck worked on each side with a stylised taotie mask, wood stand. 20cm high. (3). Estimate: HK$800,000 - 1,200,000, US$ 100,000 - 150,000

Vases of archaic bronze form fashioned from the finest white nephrite represent the pinnacle of quality in the Qianlong period. Archaism was highly fashionable at the Imperial court, encouraging artisans to utilise archaic motifs such as the 'taotie' mask in the decoration of vessels.

The outstanding workmanship on this vase is encapsulated by the skill with which the stone is worked into a continuous scene unfolding around the exterior of the main body, utilising the subtle natural flaws in the stone to dictate the natural contours of the landscape. Naturalistically worked as a cluster of two finger citrons, the natural texture of the fruit captured by the subtle surface bumps and glossy polish of the stone, the larger fruit towering above the smaller, both with elongated thick tendrils with curled ends, all issuing from an openwork of gnarled branches bearing further large lobed leaves worked in high relief, a lone pheasant sitting on a stalk with its head back-turned, the stone pale green with slight light brown russet stains, stand. 19.7cm high. (2). Estimate: HK$80,000 - 120,000, US$ 10,000 - 15,000

The Buddha's hand citron, which takes its name from the shape of its fruit that resembles the idealised digiform fingers of the Buddha, has a strong fragrance and is used as an altar offering during the New Year celebration. The first character of its name, 'fo', is a pun for 'fu' which translates as blessings or riches, while the second character, 'shou', is a homophone for longevity.

John Ford began to collect in India and Nepal in 1963, and has consistently visited Asia almost every year with his wife Berthe, sharing their deep love of Asian art, forming the collection which the renowned scholar Pratapaditya Pal, and author of Desire and Devotion describes as 'the outcome of the intense desire and passionate devotion of both Fords'.

John Ford was also profoundly influenced by his godfather and mentor, Edward Choate O'Dell (1901-82), the famous Baltimore collector of Chinese art and founder of The International Chinese Snuff Bottle Society, whose collection was exhibited at the Asia Society, New York in 1982. He was regarded as a 'renaissance' man for his broad interests in engineering, law, music and Chinese art, and a pioneer in the study of Chinese snuff bottles.

The name Ford is famous in Himalayan art, and O'Dell is famous in Chinese snuff bottles, but only close friends and relatives would have been aware of the collection of Chinese decorative art begun by O'Dell in the 1930s, and continued right up to the present day by his protégée. Many of the larger vessels here were purchased by O'Dell from the great liquidation sale of Yamanaka & Co., held at Parke-Bernet Galleries, New York, 24-27 May 1944. The others were acquired by O'Dell and Ford from galleries they visited on their extensive international travels.

Edward O'Dell had an eye for classic, archaic form. This is reflected in his choice of vessels derived from archaic bronze shapes: an Imperial white jade 'guang' vessel (lot 390) with original zitan stand, comparable to an example in the National Palace Museum, Taipei; a rare yellow jade 'fangding' (lot 417), closely related to a spinach jade example in the Palace Museum, Beijing; and the outstanding white jade 'hu' (lot 427). There is also a broad range of carvings encapsulating the diversity of auspicious symbols in Qing dynasty art, including various fruits, lingzhi fungus, auspicious animals, and a large white jade finger-citron (lot 389), emblematic of the Buddha's hands.

Julian King adds further: "The Fine Chinese Ceramics and Works of Art sale on 25 May contains a rich diversity of material, ranging from ancient bronze swords from the Shang dynasty (12th century BC) to 19th century porcelain. Amongst the 250 lots, there truly is something that that will appeal to a large group of collectors". Two bronze spear heads, each with leaf-shaped head and oval socket, the waisted blade at the head then flaring towards the shaft with two piercings, the indented leaf-shaped region corresponding to overall outline (largest 25cm); together with a large bronze utility knife, the thickened spine slightly concave, the flat grip cast in I-beam, the pommel in the form of an L-shape (27cm); a knife with straight beak-shaped blade, the grip decorated with deeply-cast parallel lines terminating with a slightly flattened jingle with openwork containing a bronze bead (27cm); a bronze ritual implement with one side bare with only a ridge pointing down from the guard, the other side decorated with interlocking squared spiral pattern, the grip terminating in a narrow neck and rectangular pommel in the form of an open jaw with two circular eyes and a pattern of triangles (33.5cm). The largest 33.5cm long. (5).

The pair of spear heads represents the standard Shang spear head designs of the Anyang period. A similar spear head was excavated at Dasikong Village, grave number 304. One of the spear heads has a handsome azurite patina; the other with a copper oxide/lead oxide and malachite patina, while the central region is filled with possibly silver oxide.