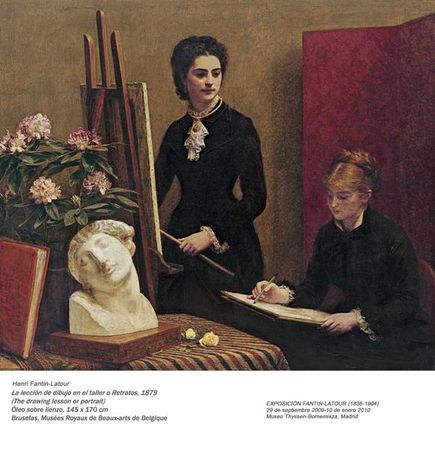 This autumn the Museo Thyssen-Bornemisza in Madrid is presenting Fantin-Latour 1836-1904, the first major monographic exhibition to be devoted in Spain to this French painter. It has been organised in conjunction with the Fundaçao Calouste Gulbenkian in Lisbon, where it can be seen this summer.
The exhibition features a comprehensive selection from the artist’s oeuvre comprising 70 paintings, drawings and prints loaned from museums and institutions around the world. Using a chronological arrangement that follows Fantin-Latour’s career through the second half of the 19th century, the exhibition includes some of his most famous paintings, among them group portraits of family members and friends, interiors with figures and realist still lifes, as well as allegorical and musical fantasies. Fantin-Latour was a pupil of Courbet for a short period, a travelling companion of Whistler and a friend of Monet and Degas. Henri Fantin-Latour (Grenoble, 1836 – Buré, 1904) is an artist difficult to position within the history of French painting in the second half of the 19th century. His group portraits, conceived almost in the manner of manifestoes, suggest an artist passionately committed to a new approach to painting, his still lifes are close to realism, while his mythological and allegorical scenes convey the idea that he was allied to academic Symbolism. Fantin-Latour’s work coincided with the birth and development of Impressionism but he declined to participate in the group’s first exhibition and was never involved in the movement as an active member although he shared many of its aesthetic aspirations. 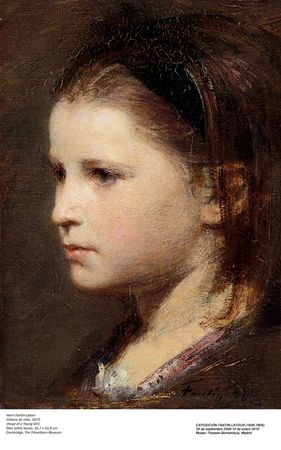 The present one, which is the first to be seen in the Iberian Peninsula, aims to reassess and champion the figure and work of this French painter whose oeuvre has been unjustly eclipsed and who has not been judged over time as one of the great figures of modern art. Fantin-Latour’s illustrious contemporary, the writer Émile Zola, said that his canvases “do not arouse an immediate attraction; it is necessary to look at them carefully, introducing oneself into them so that one fully grasps and is captivated by their mood and the simplicity of their truth.”

The exhibition’s aim is thus to do justice to Henri Fantin-Latour and to reveal him to the visiting public not just as an exquisite, refined and elegant painter but also as an artist of great quality, subtlety and profound sensibility. This is the intention behind the ambitious selection of works made by Vincent Pomarède, Curator at the Musée du Louvre and curator of the exhibition. The works are arranged with a dual chronological and thematic presentation, organised into ten sections: 1. The artist by himself
Self-portraits were the primary focus of Fantin-Latour’s activities during his early years and he engaged in this genre in a regular manner between 1854 and 1861. This introspective activity, which recalls that of other artists such as Rembrandt and Dürer, resulted in around 50 self-portraits in the form of paintings, drawings and prints. They reveal the artist’s profound investigation into the expression of emotions based on a study of his own image. 2. In the Louvre!
Fantin-Latour’s activities as a copyist were motivated not just by the need to survive financially at the outset of his career. As was the case with other artists of his generation such as Manet and Degas, this activity was a preferred method of study, interpretation and creation. Fantin-Latour was to be seen in
the Louvre almost every day where he executed commissions for copies of masterpieces by artists including Titian, Veronese, Rubens and Delacroix, his “spiritual master.” 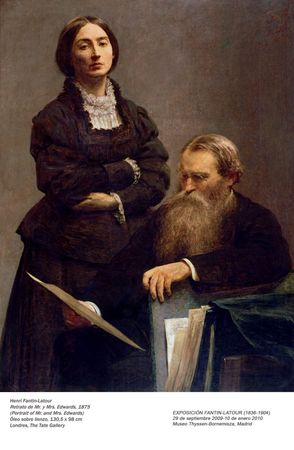 3. Intimate portraits
These works, many of female sitters, are imbued with a sense of silence, restraint and melancholy and construct an intimate space between painter and model. Canvases of this type include portraits of the artist’s family circle, such as his sisters Marie and Nathalie whom he frequently depicted, as well as portraits of celebrated personalities such as Fantin-Latour’s friend Manet. He depicted the latter with the restrained simplicity typical of his style when not constrained by the requirements of commissioned works. 4. White roses and lily branches
Flowers are a constantly recurring motif in the work of Fantin-Latour and his flower paintings could be described as the genre that he most brilliantly mastered. Particularly appreciated in England, these works are characterised by their balanced, elegant and disciplined compositions, constructed through meticulous relations of forms and colours. The artist’s dedication to this genre can largely be explained by commercial reasons as from a certain period onwards he devoted almost every summer to executing flower paintings that his English dealer, Ruth Edwards, would collect from him in the autumn. Despite this, Fantin-Latour’s flower compositions are never totally dictated by commercial imperatives 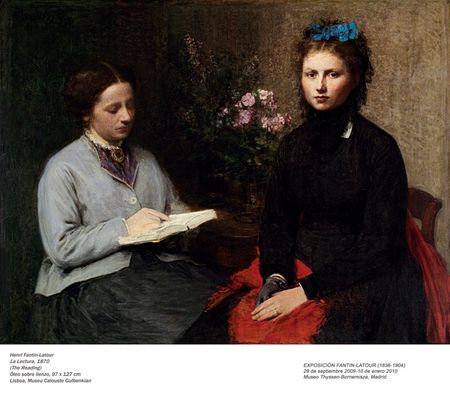 5. Studies and readings
These intimate portraits, imbued with a sense of mystery and complicity, evolved into genre compositions that look back to the restrained tradition of Dutch 17th-century painting. They are formally realist works of an almost photographic nature, but behind their apparent order they conceal an unexpected disorder that is conveyed in the self-absorbed poses of the figures, which seem to conceal a mystery. In some way these works are suggestions of emotions; 6. Friends’ gatherings
Fantin-Latour produced some of the most notable group portraits within the history of art, returning at the end of the 19th century to the lessons of Rembrandt and Frans Hals. This is clearly evident in A corner of the Table, loaned by the Musée d’Orsay, Paris, which is one of the four large-scale compositions executed by Fantin-Latour as a celebration of painting, literature and music and which can be seen as true artistic manifestoes. 7. Music of the future
Henri Fantin-Latour loved music almost as much as painting. Far from being an inhibiting and competitive factor, this passion constantly enriched his sources of pictorial inspiration and he established a close relationship between the two art forms in a manner imbued with Romantic sentiments but one that heralded his Symbolist interests. These musical “adaptations” in painting were the only subjects that encouraged him temporarily to abandon realistic themes and devote himself to the creation of imaginary, poetic and totally original worlds.
Schumann, Brahms, Berlioz and above all Richard Wagner were his sources of inspiration. 8. Austere and elegant portraits of friends While during the first two decades of his career Fantin-Latour studied his own image and that of his close friends and associates, his portraits over the following decades reveal a new, more distant viewpoint expressive of his fully mature artistic powers. During this new phase he executed portraits of members of his circle of friends and the exhibition includes some of the finest examples that best reveal the artist’s outstanding gifts for realistic painting. Portrait of Mr and Mrs Edwards (1875), of whom the latter was one of his most notable supporters and promoters in England, together with others from the 1880s such as those of his sister-in-law Charlotte Dubourg and of his friend León Maître, can be considered among the artist’s masterpieces. 9. Symbolism
Fantin-Latour’s work was initially indebted to Romanticism then subsequently came close to realism and to the “painters of modern life” before moving on, from 1880, to reveal an interest in the work of the early Symbolists. When he returned to “themes of the imagination” at the end of his career the artist revived the idea of contributing to the “painting of the future”, championing the pre-eminent role of the dream in art through works inspired by religious, mythological and allegorical themes. 10. Late floral compositions
Fantin-Latour’s last flower paintings were executed from 1876 onwards in his wife Victoria’s house in Buré in the Orne region of France. They move away from the complex floral compositions of his early years that were influenced by 17th-century Dutch painting of this type. These late bouquets of flowers generally depict traditional varieties of roses and reveal the artist’s interest in the simplicity of the composition and in a quiet, meditative mood that also conveys his own contemplative nature. HENRI FANTIN-LATOUR (1836 – 1904)
Son of Théodore Fantin, a painter and drawing master, Henri Fantin-Latour was born in Grenoble on 14 January 1836. In 1841 his family moved to Paris where he trained as a painter, first in the studio of Lecoq de Bosbaudran and later at the École des Beaux-Arts. For a period of a month he also studied at Courbet’s “School of Realism” but it would seem that the artist learned most from the Louvre where he executed numerous copies. In 1859 he went to England for the first time in the company of Whistler. In 1836 Fantin-Latour participated in the Salon des refusés and in 1864 exhibited Homage to Delacroix, the first of his group portraits of writers, painters and musicians.
Despite his friendly relations with the Impressionists, in 1874 he declined to exhibit with them in the group’s first exhibition. Fantin-Latour’s compositions on musical themes associate him with Symbolist tendencies. The artist retired in 1876 to his country house at Buré (Orne) where he died on 25 August 1904. 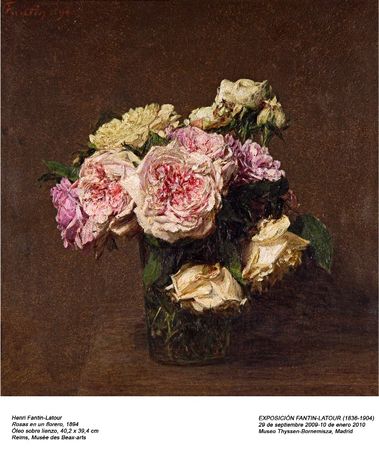